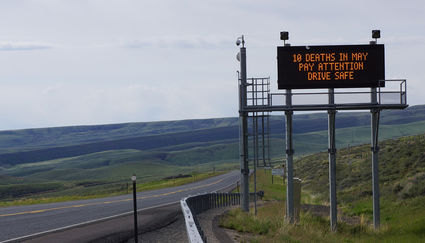 New digital message signs are being installed along highways in northwest Wyoming.

Prime contractor on the $1.4 million project is Advanced Electric, LLC, of Casper.

The new digital message signs/web cameras will be located at:

Installation of a U.S. 20 relay tower is also part of the communications project (milepost 128.99), about 4 miles south of Thermopolis.

The digital signs/web cameras won't be operational until next spring.

"Work started Aug. 12 on U.S. 26/287 near the Blackrock Ranger Station," said Kaia Tharp, Wyoming Department of Transportation resident engineer in Thermopolis. "Work will include grading for guardrail and guardrail placement starting at this location. The project will move to Shoshoni, Thermopolis, Worland, Greybull and Cody over the next month. Work will then start in the same order to install the drilled shafts, conduit, etc. Placement of the digital-message signs signs will be completed next spring."