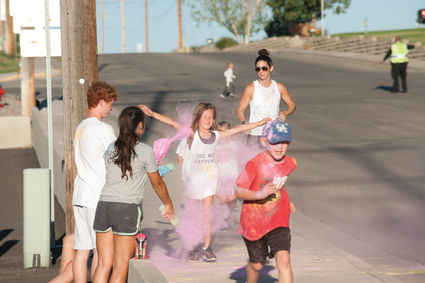 Runners in the Color Me Fun Run soak in as much color as they can as they near the finish line at Worland High School on August 27.

WORLAND - Taking advantage of the cooler weather the Worland High School cross-country team put up stronger starting numbers as they began their season with the Billings Invitational on August 31.

Typically, the Billings Invitational is among the hottest races Worland runs all year as it is held in August. Last week though, the weather was the best WHS cross-country coach Tanya Kienlen has seen. With cloud cover and light rain, the temperatures around the low 80s the Worland runners poster strong times to start the season.

"This was probably the coolest it has been in a decade. It was a blessing. It was overcast and the varsity boys even ran through some rain. It was a perfect change of weather. The cooler temperatures yielded faster times and really helped the mindset too.

"As a coach, I was just ecstatic that everyone got out into the race, settled in and everybody gave 100 percent and got some excellent times. Caleb Fraser and Gaven McCulloch came in under 18 [minutes] and that was super exciting for the boys team," said Kienlen.

"Caleb and Gavin getting under 18 was amazing. Then having five boys under 19 is a great starting point for us. There's still work to do but it's an exciting start to the season and we can build off of that," said Kienlen. "Lindsey Holiday led our girls team. We had some girls that have never raced a 5K like Elizabeth Lungren and Logan Yule. It was nice for them to get into a race and see what they were capable of."

The Worland underclassmen and new runners also stepped up and performed well in the season's first race and were locked in from the start; much of which Kienlen credits to her leadership on the team for helping set the tone in practice.

"Overall the freshman stepped it up too. Carly Venable was our second runner and Echo Allen made varsity. Jack Bishop, on the boys side, earned his varsity spot as a freshman. I think a lot of what's happening is coming from the strong leadership from our upperclassmen. As cliché as that sounds, it is so true. The culture of no complaining, no whining and just getting after it has come from our leadership," said Kienlen.

The strong times posted in Billings should give the Worland runners plenty to build off as the season progresses. Kienlen has put those times to use as the team had a tough but fun practice on Monday running their repeats with glow sticks.

The inter-squad competition is going to be a constant theme throughout the season as runners battle for varsity spots each week. And already that competition has shown up and changed the varsity rosters.

"Based off the performance times in Billings it helped yield target times for their glow stick repeats. The inter-squad competition is going to be tough all year long and we're already seeing signs of that. There were already positions being switched with some kids moving up to varsity. I think that healthy competition will keep pushing them week after week."

This week the Warriors and Lady Warriors head to Douglas for the Bearcat Invitational. As they continue to work in practice, Kienlen is also looking for her team to bond and continue building team chemistry.

"We've talked about having that good foundation of teammates you can count on and we've continued to focus on team builders like our mountain run or the glow stick run, and we're going to have a team builder on Friday with a bonfire. Establishing some unity and trust helps fuels the team," said Kienlen.

Kienlen and the WHS cross-country program want to thank Washakie Public Health and all of those who came out and participated in the Color Me Fun Run on August 27 at WHS. With over 240 runners/walkers it made for the biggest Color Me Fun Run yet.

"It was amazing," said Kienlen. "Huge compliments to Washakie Public Health to help sponsor our program. We had over 240 participants and we already used some of the money with shoes."