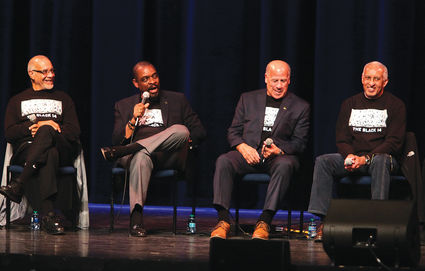 Guillermo Hysaw, center left, makes Lionel Grimes, left, Tony Gibson and John Griffin laugh during the Black 14 panel discussion Thursday in the Arts and Sciences Auditorium at the University of Wyoming. Seven players and one descendant of the Black 14 returned to campus for the 50th anniversary of their ejection from the University of Wyoming football team over a desire to protest Brigham Young University and the Mormon Church's treatment of black players.

LARAMIE - On a fateful Friday morning in October 50 years ago, 14 members of the University of Wyoming football team were suddenly dismissed from the team.

The series of events not only impacted campus but the entire state of Wyoming forever.

Eight of the 14 members dismissed from the team, commonly referred to as the Black 14, visited campus again Thursday to discuss in their own words what happened that fateful day and how it's affected their lives into adulthood.

"I came here by myself, and I left with 13 new brothers," said Ted Williams, one of the players.

The 14 players were dismissed for approaching then-head coach Lloyd Eaton to ask permission to wear black armbands for their game against Brigham Young University, wanting to protest against the racism and harassment the players experienced from the BYU football team the season prior.

Additionally, the team and members of the Black Student Alliance wanted to protest the Church of Jesus Christ of Latter-Day Saints, which had a policy at the time prohibiting black priests.

"The one way that let us know it was worth it, the next year, Brigham Young had their first African American football player," said Tony McGee, one of the Black 14. "That won it all right there."

Eaton claimed the players broke two team rules, including one against protesting and another against creating factions. Many of the players said during Thursday's panel they knew of no such rules.

"How could we have been told about a rule that didn't exist?" asked Guillermo Hysaw. "The letter of intent didn't say that. Where did we hear about this rule; where did this rule come from?"

Many of the players said during the panel that the biggest misconception they've heard in the decades since is that they were dismissed - some people even thought they quit the team - because they protested.

"We were going to go over and talk to our coach, who better to talk to?" said Tony Gibson. "We never got to explain why we were even there. ... We didn't protest anything; we hadn't gotten the opportunity to protest."

After the dismissal, many of the state residents, UW students, football teammates and even the governor and UW's Board of Trustees at the time sided with Eaton's decision.

"I always wondered how Lloyd Eaton's decision to expel us from the football team was allowed to happen in the Equality State," said John Griffin.

Although the team, coaches, fans and even state didn't support the players, Hysaw said one of the groups that did support the Black 14 was the faculty.

"Six of the Black 14 had the opportunity to pursue their education endeavors thanks to the faculty at this university," he said. "They said out of their own pockets they would pay for us not to be denied an education."

But many of players were less worried about who did and didn't support them after they were dismissed, and more what they were going to do next.

Some of the players, along with the National Association for the Advancement of Colored People and the ACLU, filed a $1.1 million lawsuit against the university and coach Eaton in the U.S. District Court later that same fall.

The plaintiffs cited violation to the First and 14th Amendments of the U.S. Constitution, along with citing a Supreme Court case, Tinker v. Des Moines Independent Community School District, which permitted the wearing of black armbands to protest the Vietnam War.

The state's Attorney General at the time, representing the university and Eaton, said the players were employees of the state, and a protest on the field would violate the separation of church and state. District Court judge Ewing Kerr ruled in favor of UW.

The case finally came to an end in 1972 when the Tenth Circuit Court of Appeals upheld Kerr's ruling.

Despite the court's decision, Black 14 member Ron Hill noted while the group faced a civil rights issue in Wyoming 50 years ago, the conversation is more than just Wyoming's or reserved for the South, but "an American problem."

If Eaton were still alive, the players gave a variety of answers as to how they'd react if he was in the Arts & Sciences Auditorium Thursday evening, from throwing him off the stage to not even acknowledging his presence.

A different response, Hysaw said he'd want to thank him because without him, he "wouldn't be the man I am today."

Getting the players to campus was a two-and-a-half-year journey involving administrators, Director of Athletics Tom Burman and former president Laurie Nichols, among others, with many of the players hesitant at first to return to UW.

Although they felt unwelcome 50 years ago, the players praised the hospitality of UW this week and when they were on campus earlier this year.

"This whole experience this week, I've seen that shift. I've seen the shift in equality, in acceptance, in diversity," Griffin said.

The players also praised the university's creation of the Office of Diversity, Equity and Inclusion; Griffin noted that office wasn't in the picture just five years ago.

One of the audience questions asked if UW has formally apologized, and McGee said many faculty have in their own way. Professors have apologized on behalf of the entire university while standing ovations and praise at a UW basketball game in the spring also had a big impact.

The players will attend other events this weekend, including being honored during a special halftime ceremony during Saturday's football game against the University of Idaho with letterman jackets.

Griffin predicted the halftime ceremony will bring a tear to his eye.

"The seven of us are going to walk on that field on Saturday, and it will be the first time in 50 years that we will all be on that field together," he said.