September 13: Warriors vs. Broncs at 7 p.m. at Worland High School 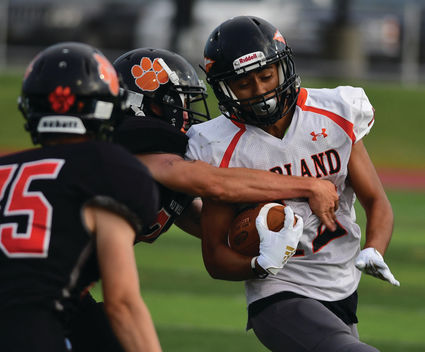 Warrior Jaime Luna tries to break free from a Panther defender during the Warriors 24-7 loss to Powell at Powell High School on Sept. 6.

WORLAND - The scoreboard in the Worland High School football team's first game of the season was a bit deceiving. The Warriors lost to the Powell Panthers 24-7 and while it seems like a beat down the game was much closer.

"We were right there and had a couple of inopportune things happen," said WHS football coach Ryan Utterback. "We were literally inches away a few times. We had too many turnovers and you can't expect to win with that. A couple of those turnovers came when we were hurrying and trying to catch up. On the other hand, our defense had Powell put the ball on the ground three or four times and we weren't able to get any of them."

Worland did have multiple turnovers in the game, four interceptions and one fumble, which did not help their cause toward victory. But they also missed out on red zone opportunities that could have given them a two-score lead heading into halftime.

"Watching film there were plays that were neutral or negative and we were just one block away from breaking it. It was frustrating at times but also exciting because we just need to clean up these minor details. It would have been nice to come out with the win and play a bit cleaner of a game. We were really close on a lot of things but we have a lot of good things to build on too," said Utterback.

A silver-lining to the Powell loss was the Warriors passing game and defense. While junior quarterback Rudy Sanford had four interceptions in the game, to which Utterback attributes some of those being due to game script as Worland tried to close the deficit, he did guide an impressive air attack, going 15/26 for 183 yards and a touchdown.

"Toward the end, we were calling plays to try and catch up. So even though statistically, he [Sanford] gets those, you have to hang a couple of those picks on us. But there are a lot of positives to build on looking at the passing game.

"Our defense did really well. Considering the turnovers and other things, it was a strong showing. Our passing game looked good and our special teams are close to breaking one. We're on the verge of putting things together," said Utterback.

The Warriors host the Cody Broncs in their first home game of the season Friday at 7 p.m., the second of three non-conference games for Worland. The Broncs are coming off a 28-6 road win against Riverton in Week 1.

Obviously, the biggest focus for Worland this week in practice has been execution. Limiting the mistakes and covering assignments could be what allows the Warriors to put one in the W column Friday night.

"Ultimately, we're going to have to eliminate mistakes and execute. Cody is athletic and really well-coached. We have to play like we should and we've played them tough at home the last few years. Again, it's just about cleaning up the little details and making sure we're getting to our assignments so we're playing solid, technically sound football," said Utterback.