Flags at Half Staff Sunday 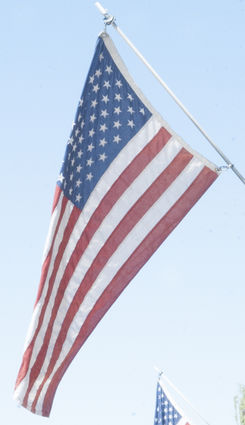 Governor Mark Gordon, pursuant to President Donald Trump's Proclamation issued today, has ordered both the U.S. and State of Wyoming flag be flown at half-staff statewide from sunrise until sunset on Sunday, October 6, 2019 in honor of the National Fallen Firefighters Memorial Service. The President's Proclamation follows:

Since 1922, our Nation has observed Fire Prevention Week to promote emergency preparedness and reaffirm our enduring commitment to fire safety. This week, we honor and remember the heroic firefighters and first responders who made the ultimate sacrifice to save and protect our citizens, homes, and communities. We express our gratitude for their service to our country, and we encourage all Americans to do their part to prevent dangerous fires.

In 2017, more than 1.3 million fires killed 3,400 people and injured 14,000 more, while causing an estimated $23 billion in direct property loss. Sadly, the number of fire-related deaths continues to rise, even though the number of fires is falling. All Americans should take the dangers of fires seriously and conduct routine inspections of smoke alarms and plan and practice home fire escapes. Such concerted efforts are crucial to stopping fires and their devastating consequences.

While preventing fires in our homes, we also must take measures to prevent wildfires, such as the catastrophic Woolsey, Camp, and Mendocino Complex wildfires, all of which ravaged communities last year. The Camp fire killed at least 85 people, and the Mendocino Complex wildfire was the largest fire of its kind in California history. Improving the health of America's forests and rangelands is critical to reducing the frequency and severity of the kind of wildfires that have devastated communities and ecosystems across the Nation. This is why I signed legislation that improves support for the Department of Agriculture and the Department of the Interior's wildfire suppression operations, as well as the Agriculture Improvement Act of 2018, which includes robust fire risk reduction measures and important forest management provisions. These bills will empower Federal agencies to actively manage our forests and rangelands and aggressively fight wildfires. Further, I issued an Executive Order to promote active management of America's forests and Federal lands to reduce the risk of catastrophic wildfires in better partnership with State, local, and tribal officials.

This week, I urge all Americans to take special precautions to ensure fire safety in their homes and communities to help prevent fire-related tragedies. By staying vigilant, we can all do our part to protect our loved ones, homes, and communities. We recognize those who take such actions, and we pledge to continue our support for the Nation's firefighters, first responders, and EMS providers who answer the call to serve and risk their lives to safeguard their fellow Americans and our precious land.

NOW, THEREFORE, I, Donald J. Trump, President of the United States of America, by virtue of the authority vested in me by the Constitution and the laws of the United States, do hereby proclaim October 6 through October 12, 2019, as Fire Prevention Week. On Sunday, October 6, 2019, in accordance with Public Law 107-51, the flag of the United States will be flown at half-staff at all Federal office buildings in honor of the National Fallen Firefighters Memorial Service. I call on all Americans to participate in this observance with appropriate programs and activities and by renewing their efforts to prevent fires and their tragic consequences.

IN WITNESS WHEREOF, I have hereunto set my hand this

fourth day of October, in the year of our Lord two thousand nineteen, and of the Independence of the United States of America the two hundred and forty-fourth.