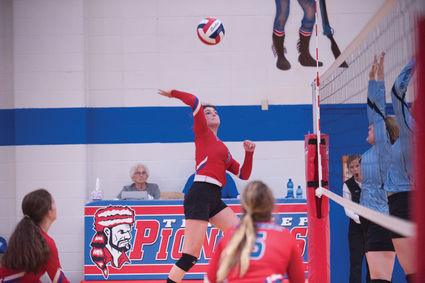 Lady Pioneer Payton Casteel goes up for a spike during the Lady Pioneers match vs. Arvada-Clearmont on Sept. 28 at Ten Sleep High School.

TEN SLEEP - Last week was a busy week for the Ten Sleep High School volleyball team, they had three matches in three days, two of which were 1A Northwest division contests St. Stephens and Dubois, on top of all the usual festivities that come with homecoming week.

Both losses were disappointing and the Lady Pioneers are still working on their back end rotations but in each match, they fought and clawed through each set. Ten Sleep's experienced players made it a point to encourage and coach their inexperienced teammates.

More reps and touches, along with the guidance of leaders Payton Casteel, Anna Watson and Bryley Moore, the Lady Pioneers should continue to grow as a team.

"They're a very good team and they have some good players and that confidence is definitely in their corner more so than ours," said TSHS volleyball coach Desiree Egger. "We're still not rotating as well in the back and we're a little slow. There's definitely a division with our experienced players and newer players, but hopefully with more touches, as the season goes on, it will come together."

Added Egger about playing two matches in a day, "I don't know if it messed with us that much but it is hard to do that. Especially, knowing that you have that conference game and all the adrenaline that you lose after losing in four, then to turnaround and play a non-conference game is tough. But you can't blame it on that, it's just super hard when there's just the six players. We've talked about it before but that's just the way it is."

The Lady Pioneers did down St. Stephens 3-0 (25-20, 25,-17, 25-16) on Sept. 26 in Ten Sleep. The fight that the team showed in that win over the Lady Eagles carried over to Saturday's matches, and while it didn't result in wins, Egger was pleased that her team carried that never-given-in attitude for all three matches last week.

"The fight they showed was really nice to see. They had a lot of fire in the games against Arvada, Dubois and St. Stephens and coming off that Meeteetse tournament it really was good to see that spirit. It was good to see them be competitive," said Egger.

This week the Lady Pioneers prepare for the Bobcat Invitational in Thermopolis on Friday and Saturday. Tournaments haven't been kind to Ten Sleep this year but Egger is using that as a challenge for her team. She wants to see them bring that same determined spirit they had last week into the Thermopolis tournament.

After the tournament, the Lady Pioneers have a quick turnaround as they host the Burlington Lady Huskies on Tuesday at 6 p.m.

"We talked in the locker room that we have to be ready to work and get after it. We know we don't play well in those kinds of tournaments and we really need to buckle down. Then we have a quick turnaround and have to play Burlington on Tuesday. We just need to focus on improving on the things we're not executing the best," said Egger.