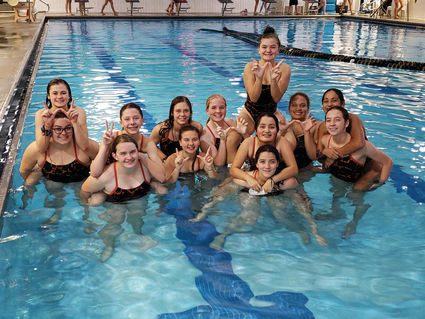 The Lady Warriors pose together after their dual vs. Buffalo on Sept. 28 in Buffalo.

WORLAND - The 2019 girls swimming season has been a unique one for the Worland Lady Warriors, to say the least.

"It's been a pretty challenging season," said WHS girls swimming coach Mike Blissett. We haven't had our pool to practice in for essentially the majority of the season. It's only through a stroke of sheer luck that the facility was designed with the two extra lanes in the community pool and we are so incredibly grateful for those lanes."

The two extra lanes have allowed for the Lady Warriors to continue to practice but there have been added obstacles. For one, there are just two lanes for the team of 13 swimmers, the lanes are shallower and the water is warm. And that's just for the swimmers, the divers have not been able to dive during the week leading up to a meet.

Still, with all the twists and turns that have been thrown their way, the Lady Warriors persevere. They continue to cut time in the pool and keep raising their diving scores.

"These girls adapted and persevered better than their coaches could have ever hoped for. What is even more remarkable is the fact that this team has remained competitive with the rest of the teams around the state, our times are still improving dramatically, and our divers' scores are climbing despite not even being able to dive during the week," said Blissett.

And for Blissett, this year's team has become one of his more favorite teams that he's coached. Day in and day out, the Lady Warriors push themselves in practice, stay connected as a team and just push any kind of negativity out the door.

"I think that speaks to the character of these girls, and the heart of this team. They could have given up, but they didn't, in fact, they're trying harder," said Blissett. "They could have terrible attitudes about the situation they're in, but they're still excited and enthusiastic during practices and at meets. They could have taken out their stress or frustration on each other, but instead of tearing each other down they've come together and become probably the most fun and bonded group of girls I've ever coached.

"In my mind, these girls define "Warriors," and I can't describe how proud I am to be coaching this team. I'd like to thank everyone involved in repairing the pool, we could see the time, care and effort that went into that process, and we truly appreciate everything that was done."

The Lady Warriors have had three swimmers already qualify for state, juniors Kylie Warren, Ella Stanek and sophomore Kelli Frimml have all punched their tickets for the 3A State meet in Gillette on Nov. 7-9. Sophomore diver Ashanti Pedraza qualified for state with a 150.40 score, which also earned her first place at the Buffalo dual last week. So far, Worland has a swimmer or diver qualified in 11 of the 12 events.

Times continue to drop for Worland from meet to meet, and some of the biggest time shedders are the freshmen swimmers. DeEtte Hofmann, Shani Osorio and Brianna Padilla have all cut significant time in their respective events this season.

"It's always fun watching the times come down, especially when they come in big chunks from the younger girls. From the first time a freshman swims a long race, like one of the 200s or the 500, to a couple meets later when they swim it again, there's usually a realization that one, they're going to survive, and two, they can go faster. Then they finish and look up to see that they just dropped 35 seconds off their 500[-yard] free, or 15 seconds off their 100 free, and it's fantastic.

"Our freshmen this year are doing exactly that. DeEtte Hofmann, Shani Osorio and Brianna Padilla are our freshmen crew this season, and it has been exciting watching their technique improve, times fall, and completing events that in some cases they never thought they could do," said Blissett.

Led by Pedraza, the Lady Warriors sophomore divers, Moriah Brown and Marley Downing have gotten better with each meet, while also helping out the team where they can in swimming events.

"Ashanti Pedraza, Moriah Brown and Marley Downing are working hard to both increase their scores, improve the dives they have, and also learn the required number of dives needed to compete at our last two regular-season meets, including the conference meet at the end of the season. In addition to that, they've been making a tremendous contribution to the swimming side of our team this season, each of them competing in individual swimming events and helping out in relays," said Blissett.

For the Lady Warriors sophomore swimmers, Frimml picks up where she left off in 2018 and Ashlyn Erickson has developed into another leader for this team.

"Our swimming sophomores include Ashlyn Erickson and Kelli Frimml, and they're both visibly improving from week to week as well," said Blissett. "I'm excited that Ashlyn, though she may not realize it yet, is emerging as a leader in practice. She's leading her lane and working very hard, and I know it will pay off for her. She's already seeing some great results in meets, and I'm looking forward to seeing how much more time she can shed in the next few weeks."

At the start of the season, Blissett challenged his junior swimmers to assume leadership roles on the team. To their credit, Kaila Harris, Annalise Newell, Stanek and Warren have done just that. Stanek and Warren two of the team's three captains this season and have grown as leaders as conference and state inch closer.

"I mentioned before that our juniors were going to have to step up and be leaders this season, and they have done that very well. Two of our three captains are juniors, Ella Stanek and Kylie Warren. They are doing a great job this season, both in and out of the water and at the same time learning a lot about what it takes to have the title of captain. Both girls have qualified for State in their main events, and are ready to try for more," said Blissett.

The lone senior on this year's team is Alejandra Rice. Her versatility in the pool, along with her leadership, as one of the team's captains, has been invaluable to the Lady Warriors this season.

"She is one of our three captains this season, and having a senior on our team is so valuable to all of our girls. Alejandra has stepped into that role nicely, and we're so very glad to have her. Her swimming times are serving to back up her leadership role as well, she's finding herself anchoring relays, and we are really appreciating her versatility in events that some of her younger teammates can't handle yet," said Blissett.

This week, Worland has a dual vs. Lander, in Lander, on Friday, followed up by a home dual Thursday, Oct. 10 against Powell.