The News Editorial: Celebrating the freedoms in the First Amendment 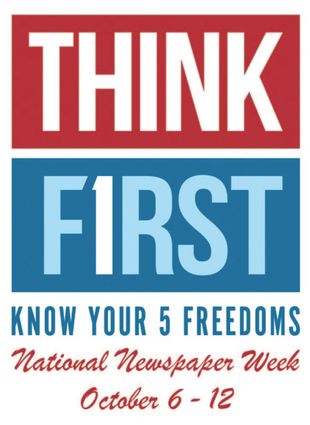 The First Amendment states, "Congress shall make no law respecting an establishment of religion, or prohibiting the free exercise thereof; or abridging the freedom of speech, or of the press; or the right of the people peaceably to assemble, and to petition the Government for a redress of grievances." The freedoms our Founding Fathers felt were THE most important for our republic were:

Of course, for a newspaper, freedom of the press is of the utmost importance but as a newspaper the other freedoms are also extremely important and intertwined.

As a newspaper we give people who peaceably assemble a voice by reporting on their protests, on their assemblies, on their grievances; same for those petitioning the government regarding their concerns and grievances.

We give people a voice through our opinion page to share their thoughts and opinions on things that matter to them; to exercise their freedom of speech.

Every page of the newspaper is there to inform, to educate and, at times to entertain, but always with the freedom from government interference.

I probably tell this story every National Newspaper Week, but it highlights exactly what we do as journalists and newspapers. When I was working for the Lovell Chronicle, one of the school districts had been involved in civil suit and as each part of the case moved forward or there was a new filing I reached out to the superintendent, the late Grant Sanders, for comment.

I knew, more than likely, he could not speak and would refer me to the district's attorney, however, it was important to the story and to our readers that they knew I attempted to present both sides.

Mr. Sanders took my call that day. I said something to the effect that he probably knew why I was calling, and proceeded to tell him I was seeking a comment about the latest filing.

He chuckled and said he appreciated the call, but added that I knew he could not comment.

I replied that I knew that, but he knew I had to try.

We had a mutual respect for each other's opinions.

He knew I had a job to do and while the suit was not exactly positive news for the district, he knew I would treat the district fairly and I would be unbiased in my reporting.

It is those relationships that I have continued to try and build at each community and it is that type of reporting I try to instill upon the reporters here at the Northern Wyoming News.

We have a job to do, to chronicle the good, the bad and the ugly, but we can do it with respect and with fairness, for we are writing about our neighbors and our friends

So this week, during National Newspaper Week remember to Think First, think about your First Amendments and do not take them for granted. Cherish them as long as we have them, pray (if you are so inclined) that we never lose them, stand up for them when you can.