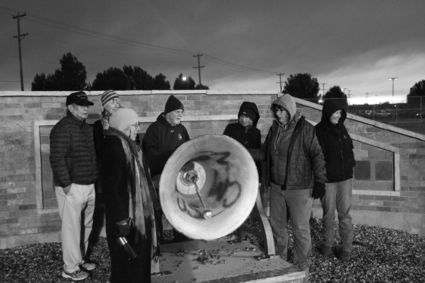 The Warrior Hall of Fame inductees ring the bell as the Warrior football team storms the field before the Warrior-Rawlins game on Oct. 4 at Worland High School.

The first eight inducted into the Warrior Hall of Fame (Francie Faure, Mary Faure, Debbie Hammons, Tom Harrington, Carl Selmer, Grant Ujifusa, Roger Youtz and David Zuniga) was one impressive legacy after the next. The community meet and greet and dinner that proceeded it played out like the most intense game of "One Upping" I have ever seen. You could have cut up a montage of that night with "Anything You Can Do (I Can Do Better)" playing in the background and it would have been perfect.

Of course, no one there was trying to stand above any of the other inductees, all of them were perfectly gracious and moved by the honor. Selmer was unable to make it and Youtz, who passed away in 2017 had his daughters Kaye Turner, Susan Youtz and Diana Shipley stood in for him.

Hall of Fames are a way to celebrate the accomplishments of those enshrined in them and as a means for younger generations to connect with the past. The Warrior Hall of Fame was every bit of that and more. Having done some research into the inductees, it was fun to listen to the crowd as an inductee had their accomplishments listed off. It was like at a football game when a back has room to run then they find a cutback lane, make a few more flashy moves and eventually, they trot into the end zone. All the while the crowd is getting louder and louder with each move and then it's pure pandemonium.

It was just awesome to see the first eight honored for their many, many achievements and what's even better, there's more to come.

Superintendent David Nicholas thought of the Warrior Hall of Fame, WHS AD Mark Mortimer, along with the selection committee made up of Teri Logan, Joe Bishop, Bruce Miller, Wade Sanford and Greg Bradshaw, picked the perfect eight to be in the first class and Mortimer and secretarial-assistant AD Margie Laird hit it out of the park with the execution of the Hall of Fame Week.

Also, the diversity surrounding the first eight was terrific. There was a good blend of athletic, academic and district achievements. Personally, I enjoyed all the stories dealing with Youtz. He was a good basketball coach but where he made his impact was as a teacher and administrator. Being such a positive influence on all his students is immeasurable and has a lasting impact for generations.

Speaking of impact, I think it's going to be cool to see what the next crop of future Warrior Hall of Famers are going to do. It's easy to get tied down by the thought that well I came from a small school in a small state, so my ceiling is capped, but the accomplishments by the first eight clearly pushback against that narrative.

And hopefully, some kids on Friday night heard all that the Faures, Hammons, Harrington, Selmer, Ujifusa, Youtz and Zuniga have accomplished at WHS and beyond and thought, "I want to be in that same position someday." Then they go out, do incredible things, get the nod for the Warrior Hall of Fame and motivate future generations, creating an everlasting chain of success at WHS.

I can't wait until next year and to read up on all achievements by the next class of Warrior Hall of Famers.