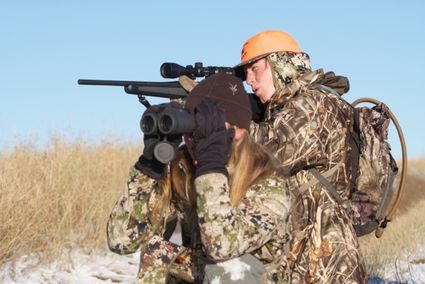 BUFFALO - Snow covers the alfalfa field as the sun's first light creates a soft, golden glow. The air is still, and a calm hangs over the field.

The Wyoming Women's Antelope Hunt is a yearly event held at the Ranch at Ucross. The Wyoming Women's Foundation started the hunt in 2013 as an opportunity for women to build a strong camaraderie. The hunt also raises funds for the foundation, whose mission is to support economic self-sufficiency for women and opportunities for young girls throughout Wyoming.

Some of the women gathered on this cold October Friday have attended the event before; others, like Ryan, are first-timers.

Ryan is disciplined. She believes in living healthy and strives to teach her students the same in a school that she said is all too often afflicted with gang violence. She began her first teaching job confined to a wheelchair.

Ryan was diagnosed with genetic hip dysplasia. For years, she believed she had somehow injured her back. But doctors discovered that

Ryan's hipbones were too shallow to hold her femoral head (the highest part of the thigh bone) in place, leading to shocking pain. If left untreated, it would eventually lead to hip dislocations under stress.

To correct this, doctors performed a periacetabular osteotomy (cutting the bone around the socket, which is then repositioned). The procedure required surgery on both hips, limiting her mobility for over a year.

"It's been a really hard and slow last few years," Ryan said. "I haven't been able to be active and do what I want to do. I couldn't stand. I was in a wheelchair and worked my way to crutches, then to one crutch and then a cane. I've slowly worked my way back, literally, up on my feet." Ryan teaches weightlifting and fitness at Aurora Central High School in Aurora, Colorado. One of her greatest passions is playing rugby, a football-like sport minus any protective pads or helmets. To play, one needs strength, grit and endurance.

Originally from Sheridan, Ryan was raised around hunting, but she's never harvested an animal herself. So Ryan made a New Year's resolution by writing it on a note card: Before the year was over, she would go big-game hunting.

"I was raised to be self-sustaining," Ryan said. "To take care of myself and everyone around me. I think it's huge to go and harvest your own meat. I'm a meat eater, and I think it's important to know where your meat comes from."

The women's foundation provides a day on the shooting range before the hunt officially begins. This allows attendees like Ryan to get familiar with their rifles and to sight them in correctly with plenty of experienced instructors on site. When Ryan first heard of the women's hunt, she didn't know what to expect.

"So they're all using pink guns? What's the deal?" she said. "But then I learned it's a 'with women for women' sort of deal. It's about being self-sustainable to help yourself and others around you. It's awesome and I'm all about that."

A friend told her of the scholarship available for the hunt; she applied and was awarded the opportunity. Ryan's goal is to learn how to fill her own freezer with meat she's harvested, to gain a new sense of independence and self-reliance.

"I honestly didn't know quite what this weekend was about," Ryan said. "Until I got here, and now that I'm here, hearing people talk about setting it up and what it's all about, I'm blessed to be here."

Ryan's hunting partner for the Women's Antelope Hunt is Trista Ostrom. At age 27, Ostrom is the chief of staff for Wyoming's first lady, Jennie Gordon. A native of Powell, Ostrom is part of the first lady's team this year. Her goal is to harvest an antelope from close range.

Ostrom has hunted big game in the past. Raised by a single father, she was taught how to handle a rifle and field strip her harvest.

"I have hunted my whole life," Ostrom said. "But what I love about this is, this is the first time I have had a female guide. I don't have any pressure. There's no 'shoot the gun, we got to go.'"

Their guide is an experienced hunter. Gloria Courser has hunted and instructed archery and rifle marksmanship and began officially guiding in Teton County and the surrounding areas three years ago. She not only guides but also instructs and coaches, never losing her positive attitude when something frustrates her.

Today she has two hunters, Ryan and Ostrom. It is the first time she has guided solo as part of the Women's Antelope Hunt. At approximately 6:30 a.m. the party loads their gear and themselves into Courser's white pickup truck and heads to their designated hunt area.

Courser believes that stalking game, getting lower and "shimmying" is one of the most exciting elements to hunting

Courser has only been to the designated hunt area once before. She scouted the area, an hour's drive from the Ranch at Ucross, days before. Along the way, the three discuss the lessons learned at the range the previous day and the local news. As the sun begins to crest the eastern horizon, Courser's white truck pulls off the highway onto a private road. The landscape changes from homes and farm buildings to snow-covered alfalfa fields with tall pivot-head irrigation lines standing as silent sentries.

Binoculars scan the horizon. When they spot an antelope herd, the women watch.

"We're just going to see what they do here," Courser says. "I think they are just going to slowly move in a circle down the other side of this hill. These antelope are pretty used to seeing farm trucks; hopefully they don't take off."

Courser instructs Ryan and Ostrom to exit the truck. She checks their rifles and gives refresher instruction on loading the magazines, the use of safeties and how to use the "shooting sticks," a pair of sticks that act as a bipod to steady a shooter and the rifle.

Leading the way, Courser and her team walk a farm road to the location she believes the antelope will eventually be. Courser crouches low, and her hunters mimic her movement. The team stops. Courser tells them to wait as she low crawls to a small bush. Seconds later, she motions Ryan to join her.

From her position, Ostrom can't hear what is being said. But she watches as Courser motions to Ryan to get into firing position and steady herself.

Silence falls over the field. Then a single rifle shot shatters the cold morning. Ryan shoots a round directly through the buck's right lung. Her first harvest is completed at 83 yards with one textbook shot.

Ostrom stays low but moves quickly to the bush. Courser, shielding her eyes from the sun, scans the horizon. The buck ran a short distance and fell to the ground, a splash of crimson on white snow shows the location where he was standing when Ryan's bullet found its mark.

"He's down, not moving." Courser says.

Courser teaches Ryan how to ensure that her game tag is correctly filled out as the guide cleans the antelope. Ryan finishes her tag and listens and assists Courser, in order to learn the process.

Ostrom brings a sled from the truck to make retrieval easier.

Inside of a half hour, they return to the truck and are rounding the field to the find the next herd.

After driving about 3 miles, they find them. A large herd of antelope bedded down. Courser's plan is to hide the truck behind a small hill and walk up a draw, providing cover for the stalkers to approach. It works.

At the top of the draw, as the field opens, Courser gets lower than before. She covers her face with her camouflage mask and hood.

Courser motions to her hunters to get lower while she slowly belly crawls into tall grass and watches the herd. Moments later, she motions for Ostrom to join her. Together they identify the large buck in the herd.

As Ostrom slowly moves into a firing position, a large doe spots them. The doe stands but doesn't break, never taking her watchful eyes off the team. But Ostrom's movements are slow and deliberate. As the rest of the herd becomes curious, a shot breaks the silence.

Ryan quickly moves to their location as Courser gives Ostrom a hug. This is the first time Ostrom has harvested a big game animal without assistance from her father or boyfriend. In an almost spot-on repeat of Ryan's shot, Ostrom had landed one round perfectly behind the buck's right shoulder, directly through his lung - textbook .

As the hunters walk to the buck's location, Courser takes a moment and uses her range finder from the position, it reads at 90 yards.

During Courser's first year guiding the hunt alone only two shots were fired and two large bucks harvested, each at close range and it wasn't even noon on the first day.

As if to prove to herself that she has recovered, Ryan volunteers to shoulder-carry the buck the entire 350 yards back to the truck. She's healed and stronger than ever.