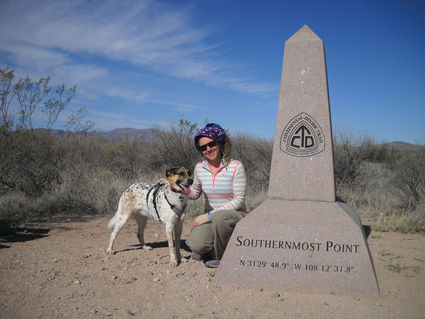 Elizabeth Stearns and her dog Toolik get ready to start their hike along the Continental Divide National Scenic Trail at Crazy Cook Monument, the southern terminus of the CDT.

WORLAND - Imagine hiking 2,410 miles in seven months, seeing all types of scenery and weather. It may sound like a dream come true for some and a nightmarish ordeal for others. For one former Worland resident it was a once-in-a-lifetime experience.

Elizabeth Stearns, the daughter of Breece and Sherryl Ferguson, grew up in Worland and now resides in Luverne, Minnesota, with her husband Joseph and their dog Toolik.

She has long wanted to do a thru-hike across the United States. This year was her opportunity as she hiked the majority of the Continental Divide National Scenic Trail.

According to the Continental Divide Trail Coalition, the Continental Divide National Scenic Trail (CDT) is "one of the most significant trail systems in the world. Established by Congress in 1978, it spans 3,100 miles between Mexico and Canada, traverses five states and connects countless communities along the spine of the Rocky Mountains."

She said she enjoyed long walks and told people as a child that she was going to walk across the country some day. In more recent years, she added, she discovered the CDT. "I thought, 'oh, here we go. I can do that."

Stearns explained in a recent interview while she took a break from her hiking to visit her folks in Worland, that there are three thru-hikes available - the CDT, the Appalachian Trail and Pacific Crest Trail.

She said the CDT is the longest and hardest trail, which were two reasons she selected it, but added, she also wanted to go through Wyoming. The trail roughly follows the actual continental divide, she noted.

Stearns became determined to the cross-country hike about six years ago as a way of celebrating being free of her student loan debt. Last summer she and her husband decided that this year would be the year and they begin planning physically and financially.

They saved money for her journey, and obtained an interest-free until 2020 credit card to assist with expenses on the road. Joseph sent her food packages for her to get along the route as well.

Her journey cross country, south to north, began at the Mexico-New Mexico border on April 3. She said she finished the hiking through the state on May 25.

While her intent was to do a true thru-hike she ended up doing what is called by hikers a flip-flop.

"The snow levels were just too high in Colorado to be any fun," Stearns said, so she hopped up to the Colorado-Wyoming border and began hiking again north to Canada. She did have to skip 25 miles in Wyoming early due to weather in Battle Pass, but she picked up that 25 miles on Saturday.

This fall Stearns also returned to Colorado to get some more of the trail hiked in that state. However, her CDT hike ended Saturday, roughly 250 miles short of the full CDT. She said she has the Denver to Durango section left and hopes to come back someday to complete, but when that will be is uncertain.

Stearns said she met 60- and 70-year-old hikers on the trail that inspired her, so at the age of 33 she knows she has plenty of time to complete the Continental Divide National Scenic Trail.

Stearns had some traveling companions along the way. Her husband Joseph joined her for one small section, a friend hiked with her through Montana and her dog Toolik, which she got about three years ago, was on the journey in all spots where she was allowed (not allowed in the national parks -Yellowstone or Glacier).

Both Stearns and Toolik went though about four pairs of shoes - Toolik wearing coverings that mushers in dog sleds use for summer training. Stearns said she only had Toolik wear them in rougher, rocky terrain.

Both carried packs, Stearns pack was about 35 pounds, Toolik carried a 15-pound pack with her own food and essentials.

They hiked about 20 miles a day, but since the fall equinox and the days getting shorter, the miles has shorted to about 17 miles a day.

Stearns had a trail app on her phone, the trail map on a GPS unit with several waypoints that coordinated to a paper map of the trail.

"I never really got lost," she said.

She broke up the hike into sections, hiking four to five days before taking a break for a hot shower and a bed. Her longest section was eight days across the Wind River Range in Wyoming.

Her favorite area along her 2,410 miles? "It's really hard to pick a favorite section. I really enjoyed Glacier National Park in Montana. It was gorgeous. I did get to do the San Juans in Southern Colorado and those were beautiful. I loved the high Alpine walks on their ridges. Probably my favorite way to hike is being up there on the ridge, no longer climbing."

Stearns added, "The whole thing has been fascinating in so many ways, because it goes through the Great Divide Basin. A lot of people were like 'oh, you have to go through the desert,' but it is so beautiful. It's so fascinating. All the different sections of the country that this trail goes through is just beautiful."

She met many people along the way, other hikers, only two that she knew of had dogs accompany them and those dogs did not make it as far as Toolik. She noted this year there were more than 700 hikers attempting the CDT thru-hike.

Stearns met residents when the trail would follow a road or go through a town and people were always nice and polite that she met.

And, there were the "trail angels," people who go out on the trail to assist the hikers, offering them a drink or some food.

The help and support throughout her journey was amazing, she said, especially as she noted, she was "intentionally homeless for half a year."

She said she is extremely lucky to have her husband's support. He is employed as a teacher and maintained his job so she could make her journey. He joined her for a week-long trip after New Mexico and the last time she has seen him in person was in early June.

However, she spoke to him at least every other day on the trail. At times, when she was ready to come home, either after a hard day on the trail, or just missing home, he would find the right words to encourage her and keep her going.

What's next for Stearns? She said they are building a new home and she will work on that as well as other projects around their home.