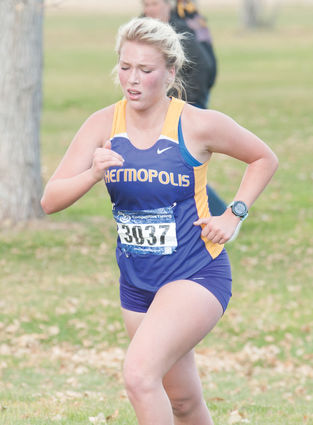 Lady Bobcat Tahja Hunt takes her final steps toward the finish line during the 2A West conference meet on Oct. 18 in Thermopolis.

THERMOPOLIS - While they were unable to defend their home course the Hot Springs County Lady Bobcats cross-country team were still able to finish second and have three runners make the All-Conference team.

Lady 'Cats McKenna Bomengen, Tahja Hunt and Hailie Martinez earned All-Conference honors. Hunt finished third with a time of 22:02.40, Bomengen was fourth running a 22:27.83 and Martinez was seventh with a time of 23:31.21.

"Tahja ran awesome and it was a good race for her, Hallie looked good and Becca looked good," said HSCHS cross-country coach Stephanie Martinez. "We did have some [runners] let Wyoming Indian get too far and just couldn't catch them. But I think it was good that it happened, especially now because it's just going to fuel their fire for state."

For the Bobcats, Isaac Robinson was the sole runner for the team. Considering the circumstances of running alone, the freshman didn't let that affect his race as his splits were consistent with the last time he ran the course on Sept. 21.

"He did awesome. For being by himself with the weather he had his splits right where they were last time he ran this course. Sure, we'd have liked them to be faster but to be by himself is pretty tough and he didn't let that affect his race. He and Karsten feed off each other very well and Isaac feeds off Karsten," said Metz.

The 'Cats will be back to full strength Saturday for the 2A State meet in Afton, and the Lady 'Cats will be out to defend their state title. Along with tapering this week, the Thermopolis team will also run in the mountains in preparation for the elevation in Afton.

"We'll take a team day and go run in the mountains. It will be a nice day to just be together and talk racing strategies. We'll also do what we normally would but just decrease our volume some so that we're ready," said Metz.