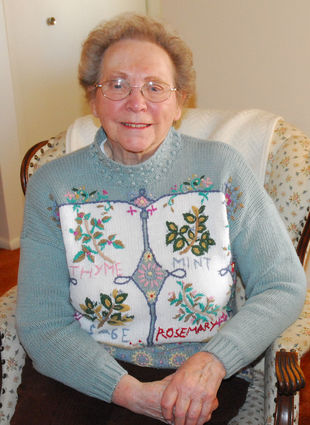 Marion was born on January 9, 1929 on the Worland Ranch just outside of Worland. She was the third of five children born to John and Elizabeth (Lehman) Eckerdt. She spent her early childhood here, attending Worland schools until the 6th grade, before moving to another ranch in Big Horn County. She graduated from Manderson High School in 1946. She immediately enrolled in Central Business College in Denver, Colorado, receiving her diploma in 1947. She worked for Husky Refining Company in Cody prior to her marriage on January 18, 1948 to Donald Clark Barngrover. They resided on the farm and raised sugar beets, grain, hay and fed livestock until moving to Worland in 1960. The couple was blessed with three children, James, Peggy and Alice.

Unfortunately, Don Barngrover developed early onset Parkinson's disease and was unable to continue farming. At that time, the family moved to town and Marion began working to support the family.

Marion was the Crew Chief for the 1960 Census for Washakie and Hot Springs County. She later worked for the Washakie County Clerk's Office. In 1970 she was appointed as county clerk, and subsequently was reelected to a position she held for twenty years. She served as President of the Wyoming County Clerk's Association. She also served as county administrative assistant for four years, retiring in 1994.

Marion and Don were active in Farm Bureau and related agriculture issues. She served as President of East Side Extension Club, President of the Queen Esther Circle, and secretary for the United Methodist Women. She has been a member, and was President of Soroptimist International of Worland, a member of the Worland Garden Club, Washakie Memorial Hospital Auxiliary, Worland Senior Citizen Center and was active in the Washakie County Republican Women Organization.

On March 24, 1998 she married Robert M. Black (Don's cousin). They traveled extensively to visit children and grandchildren. She and Bob were members of the American Legion and the Washakie County Historical Preservation Society.

Marion had a strong work ethic, perhaps based on her Volga-German heritage, and passed this strong work ethic to her children. She was a loving caregiver for Don and spent many years creating a comfortable environment for him, even building a custom house in Worland that was easier for him to navigate. Marion encouraged her children to do their best and achieve their dreams and not let your circumstances get you down. She had a strong sense of fundamental fairness and supported equal rights for women throughout her career and instilled this ethic in her children. She enjoyed entertaining and was a good cook, frequently hosting family and friends complete with the family china and silver. A wonderful time was had by all! Marion was quick to say what was on her mind and could be trusted to share the truth, in love. We will remember her beautiful smile and laugh.

Marion loved Wyoming and enjoyed exploring the Big Horn Mountains and all they have to offer. She was very proud of her Wyoming heritage and especially the strong women in our State. She was a big fan of history, especially Wyoming history and shared wonderful stories with her children and grandchildren.

She was preceded in death by her parents, husbands, Donald in 1996 and Robert in 2014, daughter, Peggy Wolt, brothers, Robert Phillip Eckerdt and John William Eckerdt and sisters, Jeanie Wright and Irene Deveraux.

Memorial services will be held 2:00 p.m. Friday, November 22, 2019 at the United Methodist Church with Pastor Kayilu Pfoze officiating. A private family Inurnment will take place at Riverview Memorial Gardens Cemetery in Worland. Online condolences may be made at http://www.bryantfuneralhomeonline.com.