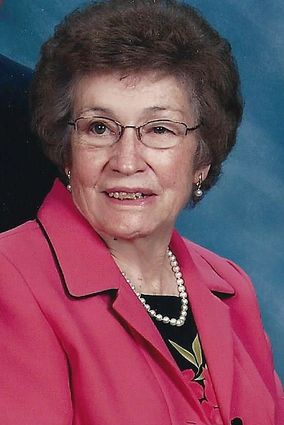 Frances May Rhodes Lass, passed away Tuesday, December 10, 2019 at Worland Healthcare. She was 87.

She was born at her Aunt Florence Robertson's farmhouse South of Worland on May 4, 1932 to Mayben and Bessie (Reed) Rhodes. The family lived on a farm North of Worland near the Washakie County-Big Horn County line. She attended school in Manderson until her freshman year when the family moved to a farm near Cody, WY. Frances graduated from Cody High School in 1950.

After graduation, she and her cousin, Alice (Reed) Lass had an apartment in Cody and worked at a local bank. They enjoyed going to the weekend dances where everyone in the valley would come together and socialize. It was at these dances that she and Alice met Con and Bob Lass – 2 brothers from Worland.

Frances and Bob started dating and on February 28, 1954, they were married in Worland. They lived on the Lass Farm on West River Road until 2013 when they moved into town. They had four children, Karen, Barbara, John, and Laura.

Frances was a hard worker, a devoted wife, mother, and grandmother. She drove truck during corn and beet harvest, handled the farm bookkeeping, and helped chase cows many many times. Frances looked forward to Thursdays where she worked as a clerk in the office at the Sale Barn for over 40 years. Frances was a wonderful cook and baker of pies, cakes, and cookies. She always had a big garden and beautiful flower beds. Frances was blessed to have a large extended family and always looked forward to the big family gatherings.

Frances was a member of Zion Lutheran Church and a charter member of Today's Homemakers. At the fair, she scooped many ice cream cones, sundaes, and banana splits.

The funeral service will be held Saturday, December 21, 2019 at Zion Lutheran Church at 1:00 PM with Reverend Roger Dobson officiating. Viewing will be at the church starting at 11:30 AM. Burial will follow at Riverview Memorial Gardens Cemetery in Worland.

Memorials may be made to the Zion Lutheran ZEST Kitchen Project. Arrangements have been entrusted to Veile Mortuary.