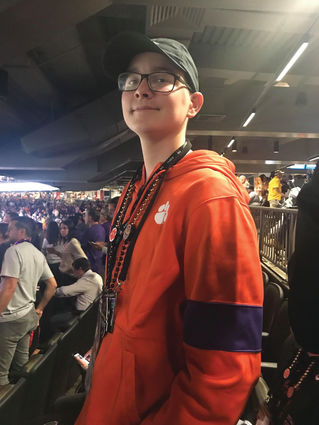 Jaedan Jackson shows his excitement for the College Football Playoff National Championship Game that was held in New Orleans on Monday, Jan. 13 as Jackson and his family were invited to attend as part his wish through the Make-A-Wish Foundation.

WORLAND – Jaedan Jackson, 16, had the opportunity of a lifetime when he and his family flew out to New Orleans, Louisiana, to attend the College Football Playoff National Championship game the weekend leading up to the game on Monday, Jan. 13.

Jackson went to the game with his mom Brittany Baker, dad Nick Baker and his brother Cade Jackson. These four all went down to New Orleans for a weekend filled with activities, concerts and the national championship to cap it all off.

This trip was made possible because of the Make-A-Wish Foundation, which according to their website grants trips, experiences, items or fundraisers, whatever the child wishes for. This is possible as long as they are referred to the program by a family member, medical professional or someone with detailed knowledge of the child's medical condition. Children are only eligible for a wish if they are between the ages of 2.5 and 18.

This trip had a significant meaning to Jackson and his family, as they are all large college football fans rather than professional football fans. It was kind of a tough pill for them to swallow at first, however, as they are Alabama fans, and went to see one of their team's rivals, Louisiana State University (LSU), play in the national championship.

They made the most of it though, as they decided to cheer for Clemson for this game since it is his doctor's favorite team.

Many of the activities that took place the days prior to the game included a concert by Tim McGraw and an alt-rock band called Judah & the Lion. Jackson and his family were able to watch this from the deck of a large boat that ESPN hosted during the event that allowed a perfect overlook.

According to Brittany Baker, she was informed that there are typically four or five Make-A-Wish children who attend events like this every year, but they were lucky enough to be the only family in attendance this year.

This led to a special dedication to Jaedan as he got a special message up on the board in the Mercedes-Benz Superdome when he and his family arrived, and later received a private tour of the stadium.

Media day is typically a day when players address the media prior to the game to inform the press of how everything is going before the big game. This led to a special moment for Jaedan and his family, as they were able to hang around and meet players from Clemson, including Clemson star quarterback Trevor Lawrence. According to his mom, they were lucky enough to have this opportunity, as weather outside the stadium forced the players to remain in the dome. The LSU players did make an attempt to come and talk to Jaedan, but the "handlers" or security for LSU did not allow it.

Jaedan was able to garner a multitude of souvenirs throughout the event, including gift bags from ESPN, the college football playoff, a ball signed by the Clemson team, and a jacket signed by both Clemson and LSU teams.

After all of these activities it led up to the national championship, which saw LSU pull ahead in the second half after trailing early, in a 42-25 game between the two undefeated teams.

Jaedan has been battling leukemia since August 24, 2018, a day that Brittany says she will never forget. After his initial diagnosis he was forced to miss his entire freshman year of high school, and has struggled to catch up in school at this point in time.

Even though he has been battling this disease for a year and a half now, he is still trying to push through and live a normal life, as he is a part of the Worland High School boys swim team. Even after having to take oral chemo treatment every day, along with going once a month to get lumbar punctures and bone marrow aspiration along with IV chemo, Jaedan still has 20 months-worth of treatment to go.

As he continues to battle this disease, Jaedan was grateful he got to go and see the national championship game as part of his Make-A-Wish.