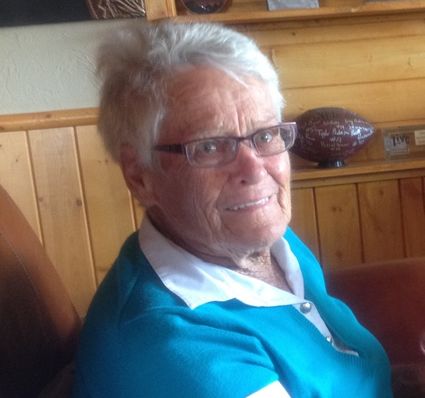 Katherine was born on November 6, 1929 in Harrison, Nebraska, the youngest of 4 children born to Thomas Lee and Elsie (Leeling) Lewis. She spent her early years in Harrison, moving to Lusk in 1939 with her family. She graduated from Lusk High School in 1948. Her family lived on a ranch which meant that in order for her to attend high school, she would have to stay with a family in town. She found a family and cooked their meals and helped around the house in exchange for her room and board. She also worked as a soda jerk at the local drugstore. Later she began helping with the medication distribution for animals. This was where she met her future husband, John Logan Brewster. The couple fell in love and with the help of Logan's football coach, they eloped on June 1, 1949. After their marriage, they purchased some land on Lance Creek, near the homestead of Logan's folks. Here they ranched until 1957 when they relocated to Ten Sleep. The best event of living on the ranch was the addition of her only son, Thomas. She poured her heart and soul into ranch life and her family. Working from sun-up to sun-down, she helped with cows, sheep, haying and cooked all the meals. There was always a large garden that provided the family with canned and frozen produce through the winter. Her spare time was spent crocheting, embroidering and in her flower garden. She enjoyed the beauty the flowers brought. When the family moved to Ten Sleep, she became very involved with the Washakie County Fair. She was part of the Ten Sleep Homemakers Club and competition was not to be taken lightly. She also helped with the State Fair in Douglas in the competitions between the counties. She served on the Washakie County Fair Board and became a 4-H leader so that Tom could participate. She was also a member of the Washakie County Cowbelle's.

Katherine was a very giving, vibrant and active person. She was right there to help someone in need. Everyone called her "Gram", youth and children were always welcome and food readily available. She was devoted to her family and their well-being.

Shortly before her husband's passing in 2013, her memory began slipping, just a bit. It was little things, so they often went unnoticed. Not long after Logan passed away, she moved in with Tom and Sherry. They were her stability and helped her through the late onset of Alzheimer's for the next five years. It became apparent that her health and safety would require more help than Tom and Sherry could continue to give, so Katherine was moved to Worland Healthcare and Rehabilitation Center.

She was preceded in death by her parents, her husband, Logan, brothers, Henry and Eldon and her sister, Evelyn.

Cremation has taken place and a Celebration of Life will be held in the spring in Ten Sleep. Memorial donations may be made to the Alzheimer's Association and sent to PO Box 524, Worland, WY 82401. Online condolences may be made at http://www.bryantfuneralhomeonline.com.