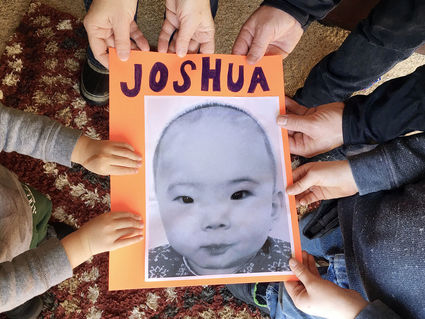 Jonathan, Suzi, Thomas and Tobias each hold a corner of Joshua's photo while in their Greybull home. Photo by Lisa Kunkel, Greybull Standard.

GREYBULL - Two-year-old Joshua Madill's room is neatly prepared with a crib in one corner, sheets crisp and clean. Playful decorations are on the wall and two sets of brand-new pajamas are hanging on the dresser. Diapers and wipes are stacked along the wall and daylight spills in through the curtains.

Only there is no Joshua. Instead of strewn toys are large suitcases, packed and waiting. One is zipped open and a pair of jeans is seen falling out.

Joshua, however, is a world away, in a Chinese orphanage.

While the Madill family anxiously waits in Greybull.

"We saw the headlines with the outbreak, and we kind of knew," said father Jonathan Madill.

On Jan. 30, when the World Health Organization determined the rapidly spreading outbreak of a novel coronavirus "constituted a public health emergency of international concern," the Madill family's international plans to pick up their son were put on an "indefinite hold."

"I felt a wave of adrenaline and anxiety, then my stomach dropped," mother Suzi said. "It could be a few weeks, a few months, or even years. Lord willing, we will go get him when it's time. He's already part of our family."

Joshua joins the Madill family as their fourth son. Their first, Morgan is 22, Thomas is 8, and Tobias is 3. Thomas was adopted domestically and Tobias adopted from China.

Feb. 10 was supposed to be Joshua's "gotcha day," a term in the adoption world referring to the day in which a person joins a family by adoption. But instead, the 10th was an ordinary day in Greybull as the Madills continued to wait.

Waiting for news about the virus.

Waiting to know when it's safe to travel.

Waiting for a call from their adoption agency.

"I have been praying and consuming less social media," said Suzi. "But God is not surprised by this," she went on to say.

What the Madill family does know is that Joshua is safe, he is being cared for, and he is healthy. His orphanage is in an adjacent province to Hubei (the location of Wuhan, where the outbreak was first identified). Their agency, Nightlite Christian Adoption, checks in with the family periodically when new information becomes available.

"Children are not affected in the same way," Suzi said, speaking of the respiratory illness, now known as COVID-19, that has quickly spread worldwide and has led to numerous deaths.

As her son's orphanage is on lock-down, homeschooling mom Suzi still has her daily life to live in Greybull.

"We still have school, work, laundry, groceries, bills. But life keeps rolling, just like for anyone in a trial. You can sit in your bed and cry, or you can get up and live," Suzi said. "This is about how we respond."

And the family is choosing to respond with patience.

Their steadfast faith, combined with being familiar with the adoption process, has made things smoother.

"With past experience we're not as worried," said Jonathan.

Yet the rural isolation of living in Greybull means some are disconnected.

"People here may not think how the virus affects adoption."

When asked by friends, "what can I do?" the Madills answer simply with, learn more about adoption.

Fears of the virus can be calmed by educating yourself on the outbreak.

Suzi is finding support through her MOPS (Mothers of Preschoolers) group in Basin. And the family is supported through family, friends and the local Greybull Alliance Church. Suzi is also a volunteer in the local AWANA program and Jonathan works in the mining industry.

"We wanted to have a big family and we are doing it in an unconventional way," they both said. Jonathan pointed to the Biblical scripture (James 1:27) that speaks to "caring for widows and orphans."

Both Suzi and Jonathan are advocates for adoption and are willing to share their story for those who have questions.

"If you're thinking about adoption, now is the time to start." said Suzi.

Thomas and Tobias' laughter echoed off the Bluffs as the family took an evening walk last week. Suzi smiled and Jonathan took turns with Thomas pushing the stroller. The family dog walked along and life simply kept going.

On Tuesday, The Department of State's Travel Advisory for China still sat at Level-4, do not travel, chalking up 26 days of standing by.

"Sometimes you want to be in control and life is not like that," Suzi sighed.

For now, the Madills are waiting on God's timing, even if that means living out of a suitcase, eager to pick up Joshua as soon as the virus is contained.