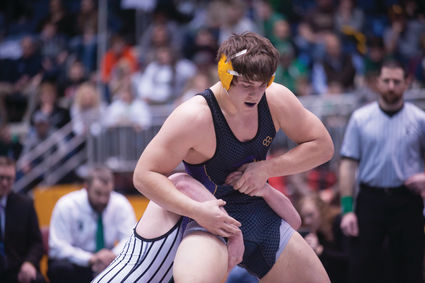 Bobcat Logan Cole escapes from Moorcroft's Parker Schlater during the 2A 220-pound championship match in Casper on Feb. 29.

THERMOPOLIS - Even though they were undermanned for the season the Hot Springs County Bobcats still found a way to close out the season on a high-note during last week's 2A State tournament in Casper on Feb. 28-29.

"We performed where we thought we would. We didn't overperform and we didn't underperform," said HSCHS wrestling coach Travis McDermott. "Austin Barral had a tough draw in where he was on the bracket and it didn't allow him to place. We wrestled that first-round tight and I think a little overwhelmed from some of the guys who hadn't been there before in that situation. But we got a lot of wins out of it and continued to improve."

At 220 pounds Logan Cole was among the highlights for the 'Cats at state, the junior repeated as 2A's 220-pound champion. Going against Moorcroft's Parker Schlater for the third time this season, Cole once again bested the senior, who will wrestle for Chadron State next fall, winning the match by way of a 4-2 decision.

Leaning on the experience he gained from last season's championship match, Cole approached this year's title bout with a business-like approach.

"I really worked on staying say in those spots. Last year you saw Phoenix [Buske] get me up above and in a bad position. This year it was about not getting in those kinds of spots. Also getting the first takedown of the match helped propel me and really control things from then on."

Cole even acknowledged that last year's championship opened his eyes to the dangers of hubris. "I wasn't like I was last year when I was overconfident. I knew what I had to do and I was a little bit nervous, honestly," said Cole.

Another edge that Cole had over Schlater, was McDermott devising a new game plan. Wanting to add a new wrinkle, McDermott had Cole use a double-blast takedown for the first time on Schlater. The plan worked and allowed Cole to command the match from start to finish.

McDermott also praised his champion for being in the right mindset as he capped the season with his second-straight title.

"You have to make sure that your mind is right. We had several hours there waiting for the championship, and he was in a good frame of mind. A couple of times I was wondering if he was getting a bit too lax, but he fired right up for the championship match. We hit [Schlater] with that blast-double [takedown] that was really the match.

"He's dominant with that shot, and he hadn't done that to Parker yet this year. That's what we were saving it for that match. The score showed it pretty close but he was focused on what he was doing and powered through it. Just what a state champion should do, just finish the match in a fashion that's dominating. He did really well," said McDermott.

Cole wasn't the only member of his team in the finals, 145-pound freshman Roedy Farrell and 182-pound senior Riley Shaffer both made the finals but were ultimately defeated, coming in second.

For Farrell, the freshman got off to a rocky start but rallied in the second period and nearly pinned Moorcroft's Parker Seeley. In the final period, Seeley, a senior who will also be wrestling for Chadron in the fall, regained control and held off Farrell just long enough to win the 145-pound title.

"We'd worked on the hand-fighting and he did a great job of that in his previous three matches. He hand-fought hard and that opened up a shot. At the start of this match he reverted to getting someone to come to him and a guy like Parker Seeley when he comes to you, he comes to you hard. The later part of the second period he got his hands going, got the takedown, put him to his back but just ran out of time. He battled back and he always does, but you have to give it to Parker, he's a great wrestler," said McDermott.

As for Shaffer, the senior had a tremendous final season and state tournament. Unfortunately, he just ran into a better wrestler, Moorcroft's Rowdy Pfeil, who is also going on to wrestle for Chadron State this fall.

Losing in the championship was tough but McDermott was proud of Shaffer for getting as far as he did and earning All-State honors in his final season as a 'Cat.

"That's just wrestling one of the best in the state, in any classification. The strength of Rowdy and his wrestling ability are up there. He's going to be a very successful college wrestler," said McDermott. "It was going to be a difficult challenge for Riley but he made it to the championship pretty easily. He had a couple of bumps along the way but he did a good job and finished out his senior year really well."

The 'Cats had two other placers 126-pound Wyatt McDermott, fourth, and 285-pound Remington Ferree, third. Ferree and McDermott made the finals in 2019 and finished second. Coming into 2020 they had their eyes on championships but injuries cost both of them significant portions of the season.

McDermott missed the first chunk of the season due to a leg injury from the football season. Still, the sophomore powered through and was among the four contenders vying for a state championship in a tough 126-pound bracket. After losing in the finals, he battled back to the third-place match where he faced Kemmerer's Colter Julian, a rematch of 2019's championship match. The senior from Kemmerer got the better of McDermott, winning with a 3-1 decision.

"Four of the six guys that placed were seniors, four of them were All-State guys and he wrestled two very tough matches. In the semifinals, he was 0-0 going into the third and we thought we could get a turn and gave up a reversal. It was devastating for him. I was a little worried about him but he proved his character and came back and made weight.

"He had another tough match with Colter Julian, who is a great wrestler and returning state champ," said coach McDermott. "He gave up that first takedown and that was the match right there. They both rode each other out and couldn't get turned. I'm proud of what he did coming back in January. I think those weeks cost him and if he had a whole season that would have made a big difference."

Ferree missed the final portion of the regular season due to a hamstring injury, coming back just in time for the postseason. After a tough semifinals loss to Southeast's Will Baker, Ferree stormed back on the final day of the tournament, pinning Hulett's Sheldon Jolley to finish third.

"Had a tough loss in the semifinals and almost had a pin in that match. He couldn't get the pin and get the kid all the way on his back. He got turned himself in the second but he came back and showed his dominance for the rest of the tournament," said McDermott. "[The injury] definitely cost Remington as well. If he wrestles the last month and a half, he doesn't let up in the second and third period and challenges for the championship."

The season did not go as planned for Ferree or McDermott but coach McDermott was still proud of the grit both showed on the second day of the tournament. Both wrestlers showed the pride and determination coach McDermott wants the 'Cat program to be known for.

"Wyatt and Remington both showed a lot of character. Losing those semifinals matches when you have your heart set on championships is just so hard to come back from. You see it all the time when kids just give up and we saw several not even make it to the third-place match. I was glad to see those guys come back and show what they're made of," said coach McDermott.

Looking at his team's overall performance at state, McDermott was incredibly proud of his wrestlers. Starting the season with their numbers, they knew contending for a state championship was unlikely. Yet, the 'Cats wrestlers showed up, pushed themselves in practice and had an excellent season.

The 'Cats finished sixth as a team with 114 points and were only 15 points out from third-place Shoshoni and 23 points from second-place Lovell. It's within reason to think that if the 'Cats get their numbers up, paired with their hard-working wrestling room, they'll be contending for a top-3 finish and maybe even a shot at breaking up Moorcroft's hold on the class.

"They'll go out and wrestle anybody. Their skillsets are above and beyond a lot of other 2A teams," said McDermott. "I think that we're going to put more of an emphasis on the team because we were four points away from getting a trophy. That's a win here, a win there and a couple of extra guys on the team – a couple of extra guys on the team puts us way up there in second place. We've got a ways to go to catch Moorcroft but we're definitely in the mix to be among the top two."

Shaffer and foreign-exchange student Jorge Agguire are the only wrestlers the 'Cats lose, the rest will all be back for the 2021 season. Recruiting and boosting their numbers are among the offseason goals for the 'Cats.

McDermott is going to do his part in trying to grow the team, and he's also challenged the 'Cat leaders to work on recruiting wrestlers to the team.

HIGHLIGHTS OF THE SEASON

2020 was a fun, eventful season for the 'Cats and McDermott in his second at the helm of the program. Picking through those highlights is tough because there are so many, but among his favorites were Austin Barral's run at regionals, Cole's Ron Thon tournament and the team just narrowly missing out repeating at the 2A West regional champs.

"Austin Barral's regional championship was pretty awesome. I've coached him since he was third, fourth grade in football and wrestling. It was great to see that. Logan's run to Ron Thon was good and getting into that state championship, and that was another good match just like last year's. Getting second at regionals was good as well. It wasn't expected and yet, it just shows where our skill level is with that many kids," said McDermott.

Bobcat placers from the 2A State tournament are as follows.