Ever so close, the Lady Bobcats fall a win short from making state 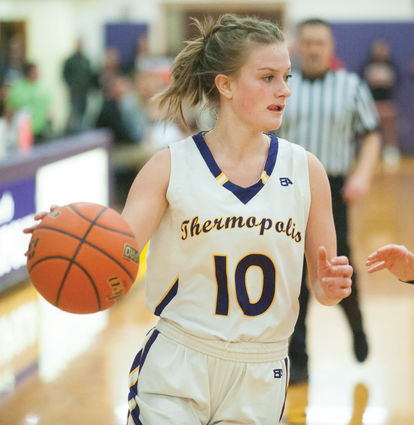 THERMOPOLIS - With a chance at making it to their first 3A State tournament since returning to 3A in 2016, the Hot Springs County Lady Bobcats fell a few possessions short of doing so at the 3A East regional tournament in Newcastle on March 5-7.

The Lady Bobcats tournament started with a quarterfinal matchup against Torrington. An offensive drought in the second and third quarters hurt Thermopolis the most, as they only scored six points combined in both quarters.

By the time the Lady 'Cats offense got going in the fourth quarter, it was too little too late, as they fell 55-39.

"We struggled to create offense," said HSCHS girls basketball coach Matt McPhie. "We played a good first quarter offensively, but our defense didn't lead to any points for us on the other end. We went cold offensively in the second and third quarter only scoring six points. Give credit to Torrington defending well, but it certainly was frustrating not having some more offensive effectiveness for such a long time span."

The loss to Torrington sent Thermopolis to the consolation round where they had to win to continue their season. Playing the Burns Lady Broncs in a loser-out scenario, the first half was a defensive struggle but the Lady 'Cats were able to head into the break with a 13-10 lead.

And in the second half, a pair of seniors put the Lady 'Cats over the top. McKenna Bomengen was a force on both ends of the court and Sesi Jensen went 6 for 8 from the free-throw line to ice the game for her team, as they went on to win 35-25.

"I think when the girls realized that this could possibly be the seniors' last basketball game if we didn't win – they fought harder than ever to get the win and come out on top. McKenna did a nice job of stepping up and Sesi hit six of her final eight free-throw attempts to help seal the victory.

The win advanced the Lady 'Cats to the consolation semifinals against the Newcastle Lady Dogies. It was another loser-out game but the winner punched their ticket to the 3A State tournament.

Things did not start the best for the Lady 'Cats as Newcastle jumped out to a 19-2 lead. Things got worse as Jensen picked up her third foul in the second quarter.

It looked grim for the Lady 'Cats, the offense was struggling to find good shots and Newcastle slowly kept adding to their lead. That was until freshman Sadie Burr provided a spark for her team. Burr knocked down a 3-pointer and was able to get the offense flowing.

From then on the Lady 'Cats slowly chipped at the Lady Dogie lead, with 1:48 in the fourth the Lady 'Cats were one 3-pointer away from tying the game at 48-45.

Unfortunately, for the Lady 'Cats, they were unable to cap off their comeback and lost 56-47, ending their season.

"Sadie hit some shots for us when they were badly needed. She's just a freshman, but her ceiling is high in regards to potential as a player," said McPhie of Burr. "After that start, we knew it was going to be an uphill battle going forward. We visited about that at timeouts and halftime. We told them to focus on doing process type things and the scoreboard will take care of itself. We got within 59-57 with less than two minutes, but we were unable to finish the comeback."

To be so close to achieving their season goal, only to fall short stings for the Lady 'Cats. And while it was disappointing to end the season at regionals, the team has plenty to be proud about. Among the 2020 achievements was finishing 13-11, the first winning season for the program since coming back up to 3A.

The Lady 'Cats seniors Bomengen, Jensen, Kaylee DeVries, Aspen Jensen, Tahja Hunt and Ashely McPhie were a big part of helping guide the program through 3A and the success they had this season. They served as excellent examples and were positive role models for their younger teammates.

"Yes, we finished with a 13-11 record and gave the program its first winning season in a couple of years. It's never easy to close the chapter to a season, but it was particularly emotional for our six seniors.

"Many of them put in countless hours extra, for the love of this game. They fought hard to the end, and they will be missed going forward. That being said, as I looked out on the court in our final game, I saw quite a few younger girls out competing at a fairly high level. We will regroup, and the future is bright for the program going forward," said McPhie.

As for McPhie's favorite moment with this year's team, it was hard to pick one but getting to spend time with this group and see them bond together as a team was among his favorite things this season.

"It's hard to pin down specific moments. I will truly remember the time spent on the practice court and away from the gym with this group. They became a team and embraced playing for each other," said McPhie.