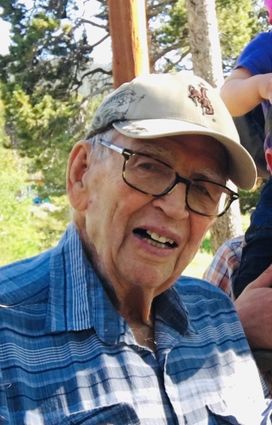 Don was born on August 6, 1927 to Don and Josephine Babbitt. During his youth, Don helped with the family business cutting and delivering ice with his dad and later driving truck. Don graduated from Worland High School in 1945 just before enlisting in the US Navy. He served at the end of WWII and was called back for the Korean Conflict where he served on the supply ship, USS Graffias. Upon return to Wyoming, he attended and graduated from the University of Wyoming on the GI Bill, an opportunity he always appreciated. In 1955, he married Sara Hilton in Oakland, CA. They came back to Worland to make their home for the next 60+ years. Don worked at the Stockgrowers State Bank for many years.

Don was involved in the community. He was active in the Worland Volunteer Fire Department for 28 years, serving as Fire Chief for several of those. He was on the search and rescue squad and served in leadership rolls on the Worland/Ten Sleep Chamber of Commerce and the Washakie Shrine Club. He was a long –time member of the Rotary and Methodist Mens Club.

Don loved to spend time with his family. Some of the best times he and Sally had were with their kids and later grandkids in the Big Horns during the summers. He was an avid amateur photographer. He also enjoyed building a great woodshop in the back of his garage.

In retirement, Don and Sally traveled extensively across the United States in their RV, completing their 49 state map. They had lots of adventures and met many nice people along the way.

Don was preceded in death by his wife and parents.

Don is survived by his children, Carolyn (Randy) Durr and Don Harold (Susan) Babbitt, his grandchildren and their families, Sheldon (Sonja) Durr, Alice and Henrietta, Carson (Kelsey)Durr, Lila and Nora, Don (Faryn) Babbitt IV, Don Harold V and Harlow, Parker (Katie)Babbitt, Carter and Rylie. He is also survived by his sister, Barbara (Estell) Brown and many nieces and nephews.

Services will be planned at a later date. Memorial donations may be made to the Worland Methodist Church. Arrangements have been entrusted to Veile Mortuary.