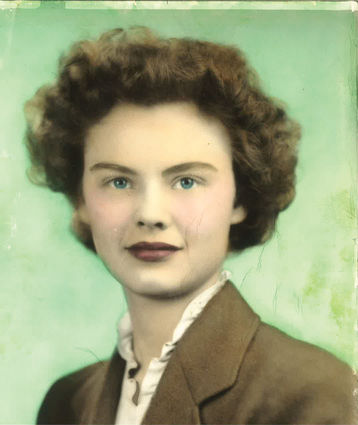 Laura H. Sperry passed away on April 25, 2020 at home in Worland with her daughters and son by her side.

Laura was born July 21, 1926 in Grundy Center, Iowa, where she grew up on the family farm. She and her brothers rode their ponies to a little school house about two miles from home in their early years. Laura always had horses in her life from the time when her daddy used horses in the fields and she would hop onto the big animals just to sit on them in the corral. Laura trained many horses and rode all her life here in Wyoming.

Laura married James H. Sperry on June 23, 1946. They headed west but ran out of money in Worland in 1951 and stayed. James worked as a lawyer and they raised three children. Laura was a homemaker and a great cook. She and her husband worked together on their cabin in Kirwin and later building the cabin in the Big Horns. Laura was a long time member of the Presbyterian Church here in Worland. She was an elegant women with a great sense of humor. She pruned the orchard, kept house, sewed clothes for her family, grew gardens, raised great bird dogs, and made three meals a day for most of her life. One of her favorite horses, Mussali Taffafa, helped many Special Olympian athletes learn to ride.

Laura was preceded in death by her husband, James, and the members of her family who all lived in Iowa. Laura is survived by her daughters Melinda Briggs and Sally Sperry (Cal Fulfer), her son George Sperry, and her grandson Guy Fulfur (Rachel). She is also survived by her nephew Robert Johnson and his wife, Barb, who have lived in Worland several years now and have helped the family greatly. She is also survived by nephew J.B. Bressler, niece Becky Johnson and several grand-nieces and nephews.

Cremation had taken place and the family will conduct private ceremonies at a later date.