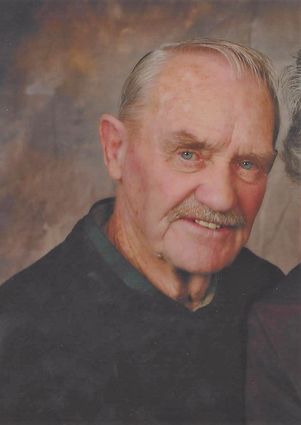 On the evening of April 20th, 2020, Ralph Bond was relaxing at his home in Worland, Wyoming. He was sitting in his favorite chair, watching the news, and playing multiple games of online Scrabble with various family members across the country. He had been in relatively good health, and had enjoyed a perfect day with a small gathering of family who had pulled their campers from Laramie to Worland to camp out in his back yard and enjoy a visit. At a few minutes before 10PM, Ralph heard the Lord's call, and in the blink of an eye, he went home. He was 94.

Ralph D. Bond was born January 5th, 1926 in Columbus, Kansas. Most of his childhood was spent in Colorado, including Denver as a boy, and as a teenager in Craig. Growing up in the depression era was challenging. (Maybe that's why he could rebuild anything out of duct tape and a bungee cord.) But Ralph's memories of those years were not of suffering, but of playing games and laughing and joking together as a family. The love of games, sports, and his boisterous, unmistakable laugh made him an ideal companion for his wife, Helen Roe. Their small-town, fairy-tale courtship included him picking her up in his milk delivery truck at the bakery where she worked. They were married in Craig on his birthday in 1948 in the First Baptist Church. They would later be faithful members of the First Baptist Church in Worland, and their deep faith and love of the Lord were the bedrock of their family life and values. In the sixty-six and a half years they enjoyed together, Helen and Ralph grew to become the most beautiful of life partners. They laughed together daily, played together often, supported each other perfectly, and treated each other with great admiration and respect. They both knew how blessed they were to have come together, each recognizing those extraordinary gifts and talents that perfectly complemented the other's. Helen and Ralph enjoyed a wide range of activities together: swimming, skiing, bowling, tennis, golf, rock hunting, biking, camping, hunting, fishing, as well as all kinds of card games, board games, crosswords, word jumbles, and especially Scrabble, which Ralph almost invariably won.

This exceptional aptitude with language was recognized by the US Navy, where he learned Morse code and served as a radio man in World War II aboard the USS Rail and then again in the Korean War on the USS Burlington. Ralph was very proud to have served his country and felt a deep patriotism, proudly raising the American flag over his front porch each day and retiring it at sunset.

Out of uniform, he went to work for Amoco as a pumper in Rangely, Colorado, where Ralph and Helen had their first two children, Ellen and Karen. In 1957, they were transferred to Worland, Wyoming where they had two more children, Susan and Brad. It made for a very full station wagon as he hauled his family off on adventures-instilling in them the same love of play and appreciation for family that has been passed down to all of his descendants, along with a collection of quirky songs and stories to help pass the miles on the road and the moments around the campfire. The Bighorn Mountains were often the venue for Ralph's harmonica and guitar music, both instruments he taught himself to play by ear. While Ralph had a great appreciation for relaxation and fun with the family, he was also strongly dedicated to his job, taking only one sick day in his 37 years of working for Amoco, from which he retired in 1984.

Ralph was the most patient, unflappable, kindhearted man, adoring funny little dogs, squirrels, birds, and gregarious children. He never had an enemy or an unkind word to say about anyone, and seemed to have a special private joke going with everyone in town-a hand gesture, nickname, a clever phrase, or tip of the hat. Passing him on the street, they would greet each other with their special inside joke, and then both laugh as they parted. Ralph was like that. He always left us laughing and smiling and feeling special.

He was the epitome of generosity-not only financially, but also with his time, energy, and attention. He delivered Meals on Wheels, was on the volunteer Ski Patrol, a proud member of the Elks, and a supporter of the Washakie Museum. Ralph always had a soft spot for anyone at a disadvantage. He was never too busy to communicate with people challenged by language or cultural barriers, even opening his home on several occasions to people from abroad. He treated everyone with respect and gentleness. And he really listened to them and appreciated their uniqueness.

Ralph was the eternal optimist. No matter what the challenge or hurdle, he always found a way to appreciate the positive and never complained. Even later in life, having lost his wonderful wife in 2014, and dealing with some declining stamina, he still kept his sense of humor and delighted in small, everyday pleasures. "That was the best French toast I ever ate!" Over the past two years he had been sharing his time between his home in Worland and increasingly staying at his second home with his daughter's family in Buffalo.

If the ultimate goal of this life is happiness, if the greatest prize on earth is to live a life surrounded by love, with a heart full of peace, and a good laugh at every turn, then Ralph Bond has won. Start to finish.

Ralph is preceded in death by his mother, Mary (Ted) Bond, his father, Ralph Storey, his wife, Helen Bond, his sister, June Kawcak, his daughter, Ellen (Rod) Taylor, and his grandson, Kegan Bethke. He is survived by his children Karen (Tim) Sullivan, Sue (Kevin) Bethke, and Brad Bond. He has nine grandchildren and 15 great grandchildren. He is also survived by a good number of special people that he embraced as his own children and who loved him like a father.

A graveside memorial service is tentatively planned for July 2020.

In lieu of flowers, donations can be made to the Disabled American Veterans in his memory. https://www.dav.org/