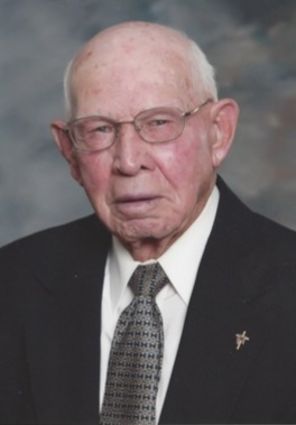 Johny was born on the family farm to Floyd D. and Lola Bell Miller on November 9, 1923, near Gilman City, Missouri. While growing up, Johny rode his horse to school in Gilman City and enjoyed his time working the farm alongside his father.

After High School graduation, Johny enlisted with the Navy. During WWII, he was stationed in the South Pacific for three years. At the end of the War, his ship, the USS San Juan, guarded the USS Missouri during the signing of the Peace Treaty. For the next three weeks, his ship assisted in liberating US POWS in Tokyo Bay; and up to the time of his passing, when Johny would recount his memory of this event, his voice would break and tears would well up in his eyes.

During one of his leaves home from the Navy, Johny married his High School sweetheart, Lorene Price. After the War, Johny returned home to the small family farm that he and his dad owned and where he and Lorene lived. During a vacation to Worland to visit Lorene's sister and her husband, Tress and Elmer Downing, the Millers decided to try living in Worland for six months.

Johny and Lorene enjoyed Worland, and in 1951, Johny began working at MDU which later became WBI Energy. After 35 years with the company, Johny retired, something of which he was very proud. After retirement, the Millers traveled extensively in the US, visiting all 50 states and spending 14 winters in Texas.

During their marriage, Johny and Lorene had two sons, Mickey, who died at 12 years of age from a short-term illness, and Dan, who is a veterinarian in Worland.

Johny was preceded in death by his son, Mickey, and his sister, Deloris Gutshall. Johny is survived by his wife of 76 years, Lorene; son, Dan (Terri); granddaughter, Chelsey (Lucas); grandson, Cameron (Haley); great-grandsons, Hudson and Ellis.

Memorials may be made to the CrossPoint Baptist Church and sent to PO Box 524, Worland, WY 82401. Cards and notes to the family may also be sent to the above address. Online condolences may be made at http://www.bryantfuneralhomeonline.com.

The Miller Family thanks the Worland Healthcare & Rehabilitation Center for their devoted love and dedicated care to Johny.