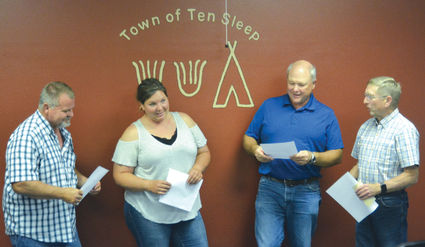 Bart DeWitt, Sylvia Nichole Norman and Ernie Beckley are sworn in by Jack Haggerty during the Ten Sleep Town Council meeting on Tuesday, June 2. Beckley was sworn in as the new mayor taking over Haggerty's position and DeWitt and Norman were sworn in as council members.

TEN SLEEP – Jack Haggerty, who has been the mayor of Ten Sleep since October 2014, said one last goodbye to the council and reflected on his time as Ten Sleep mayor in an emotional end to his long career in public service. He also served as a council member since 2003 prior to being appointed mayor in 2014 after previous mayor Sandi Juetten resigned.

In his final address to the town council,...