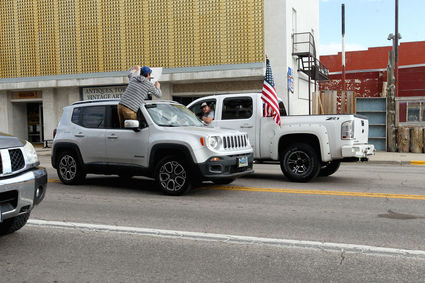 A supporter of protesters who have marched through Laramie for the past week exchanges words with a counter-protester on the city's Grand Avenue. Protesters in recent days have been marching in the streets, contrary to police requests, and counter-protesters have been approaching the crowds in vehicles.

LARAMIE - Protests against racism and police brutality have escalated this week in Laramie as supporters and apparent counter-protesters in trucks, motorcycles and Jeeps have confronted people blocking intersections along Grand Avenue.

Thursday saw the fifth consecutive day that protesters have defied police requests to confine their marches to sidewalks and instead have disrupted traffic between First and 15th streets along Grand Avenue. While the first week saw demonstrators stay on sidewalks, on Sunday they proceeded to march in the streets, disrupting traffic in an attempt to garner attention for their causes.

After a heated confrontation on Wednesday just east of the Third Street and Grand Avenue intersection between protesters on foot and a counter-protester in a large truck, organizer Timberly Vogel urged demonstrators to remain peaceful on Thursday.

"I want to reiterate that the reason we're here is not for anyone individually; we are all here to stand in solidarity against something much bigger than us," Vogel told those gathered at First Street Plaza just around 5:30 p.m. "Those people yesterday that antagonized that truck put all of us in danger, here and when we go home. So please keep in mind this is not about you, you getting to rage against the machine or to give the finger to some racist guys – well you should do that – but don't antagonize them. Don't beat their car, don't steal from them, because ultimately you're putting the organizers, a black person, at high risk because we are liable if we do anything. ... So if you're not being peaceful, you're not down for that, please leave because you're putting everyone at risk."

Things became tense Wednesday when protesters were blocking the intersection of Third Street and Grand Avenue and an apparent counter-protester approached in a large truck with a man standing in the bed waving a Trump 2020 campaign flag.

Laramie resident Seth McGee has been documenting the protests since they began last week. The demonstrations, he said, have been peaceful. But on Wednesday McGee said vehicles were blocking the intersection in what appeared to be an attempt to protect the protesters. When the truck waving the Trump flag approached on Grand Avenue heading west, McGee said it circumvented the vehicles blocking the intersection and headed in the oncoming lane toward the protesters.

"That's when some protesters started approaching the vehicle," McGee told the Boomerang. "One protester started banging on the hood of the truck while there was a group standing in front of the vehicle."

The truck continued to pull forward, McGee said, pushing until it finally broke the protest line and continued through west toward Second Street. It was then out of McGee's sight, he said.

"It got pretty chaotic, but the protesters in the street I think realized it was too dangerous and decided to give it a little more room to avoid getting injured," McGee said.

McGee said it was "100% clear" from what he could tell that the truck had intentionally confronted the demonstrators.

"The guy was already stationed on top of the bed holding the flag as it advanced toward the protesters," he said.

There were no arrests and no citations written following the incident, but there are some ongoing investigations, Laramie Police Department Lt. Gwen Smith told the Boomerang.

After protestors began occupying roadways and intersections Sunday, one of the first standoff happened Tuesday, during the portion of the protest where demonstrators blocked the Grand and 15th intersection; a truck traveling east on Grand refused to leave the intersection and find another path around. The truck's driver continuously pressed down on its horn while flipping the bird and revved its engine while protesters refused to move. After a few tense minutes, the protesters moved, allowing the truck to travel through the intersection.

The Laramie Police Department had a presence at Grand and 15th Sunday, directing traffic around the intersection. But on the subsequent days, the police appeared to take a hands off approach, advising demonstrators to not interfere with traffic and stay on sidewalks in a Monday news release.

The supporting vehicle's passenger, Tristan Eickbush, said he and the driver, Zac Shannon, were attempting to protect protesters marching near the eastbound lanes because, Shannon said, vehicles the previous day had tried to drive through protesters.

"I didn't approach him or anything. I stood at the back of his truck and said, 'No one is in front of you, so just go. It's a peaceful protest and we don't want any conflict, just go,' and he held his gun up like, 'Yeah, I'm packing, what are you going to do?' I'm not scared, I'm going to protect the protesters," Eickbush said.

Shannon added that he believed the truck's occupants were attempting to antagonize the protesters.

The demonstrations began gathering steam early last week in the wake of nationwide unrest. Protests in cities across America erupted after the death of Minneapolis man George Floyd at the hands of police. A video of Floyd being kneeled on by a police officer for more than 8 minutes has drawn international outcry from across political spectrums.

Thousands have come out in Laramie to show support for the movement to reform or outright dismantle police departments, and for most of last week confining the protests to sidewalks and other non-motorized areas. Each day shouts of "Black lives matter," "George Floyd," "Robbie Ramirez" and "Fire Derek Colling" can be heard blocks away.

Colling is a deputy with the Albany County Sheriff's Office who, in 2018, shot and killed Ramirez, an unarmed man who struggled with mental illness. A grand jury declined to indict Colling, who moved into a detective position following the shooting. Last year, Colling said in court that his new position means he no longer typically wears a body cam.

"These conflicts involved demonstrators and other people who hold different opinions regarding the issues being considered," the release states. "Laramie Police Department officers responded to those conflicts, which involved both verbal altercations and criminal behavior, and addressed them."

The release reiterated that the department "vigorously supports" the right to protest while emphasizing the request to behave legally and remain in pedestrian walkways.

Opposition to the protests have been evident since they began, with some truck drivers "coal-rolling" - blowing black smoke from the exhaust at an opportune moment - everyday. McGee said he's seen the number of protesters and counter-protesters fluctuate, but that it has seemed that the tension between the parties is growing.

"It's a concern," he said. "The fact that anybody decided to break the protest line and drive into the oncoming lane to try to make a point - that's a significant level of escalation."