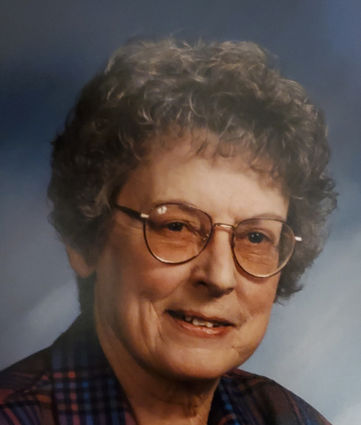 Pauline Francisco passed away peacefully at her home in Mabank, TX on May 29th, 2020.

Polly was born August 11, 1928 to Roy and Mildred (Williams) Luttes in Billings, MT. She was the Youngest of 4 children. She grew up on a small ranch in Ballantine Montana. Then her parents sold the ranch in Montana and moved the family to San Benito, TX. She graduated from San Benito High School In 1946 than 2 years later she attended Durham Business School in Harlingen, TX.

After finishing business school Polly had her oldest daughter Larson "Bunny". But do to unforeseen circumstances Polly and Bunny were separated for a long time. Then for a while she lived in Nicaragua, and then she went back to Texas and had her youngest daughter Ronda in Harlingen, TX in 1964.

Polly then moved around a lot in Texas, Oklahoma, and then finally settled in Shreveport, LA. For 8 years she worked at Master Packaging in Shreveport as accounting manager.

In 1980 she started talking to Warren Francisco who was living in Worland, WY and it was love at first sight. In less than a year Polly and Warren were married. Polly and her daughter packed up and moved to Worland, Wyoming.

Some years after Polly moved to Worland her eldest daughter and her reconnected. After that Polly and Bunny always found time to see or talk to each other. "I was really happy that I found her! I couldn't have found anyone that I liked more. I loved her very much!!"

After moving to Worland, Polly started working at the Hotel Washakie as a desk clerk for 2 years she and Warren also managed the Sun Valley Motel (Now Days Inn) for 4 years.

Polly worked for Wyoming Daily News on the night crew.

Around 2003 Polly moved in with her niece in Flagstaff, AZ. She lived there for the next 10 years then they moved back to Texas.

Polly loved animals. When she was little her father bought her; her 1st horse "Tess" which Polly had till Tess passed, this started her love of horses and pretty much any animal. Polly also loved the outdoors if she wasn't taking care of her garden; she was sitting on her porch soaking up the sun. Above all that for Polly her greatest thing in her life was her family. She loved being a mother, a grandmother, and a great grandmother.

She is presided in death by her mother and father Mildred and Roy Luttes, her brother Les, her Sisters Vera and Alma Jean, and her Husband Warren Francisco.

No memorial services planned at this time. Any letters of condolences to the family can be sent to PO Box 691 Worland, Wyoming 82401.