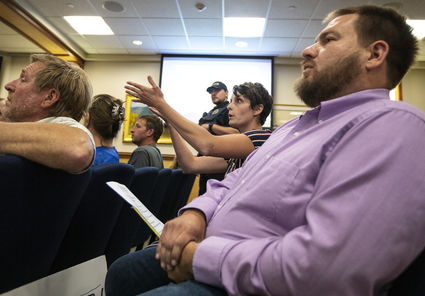 Renee Cunningham asks Gillette Police Department Lt. Brent Wasson why people were being removed from the Gillette City Council chambers during a recess in Tuesday's regular meeting. A shouting match ensued when Municipal Court Judge Doug Dumbrill resigned on the spot and proceeded to argue with people in the audience, prompting a 45-minute recess and a clearing of the room.

GILLETTE - Gillette Municipal Court Judge Doug Dumbrill abruptly resigned during Tuesday's Gillette City Council meeting, then got into a shouting match with the audience, most of whom were there to protest Mayor Louise Carter-King and the rest of the council.

The arguments between Dumbrill and the crowd escalated, prompting the mayor to adjourn the council and Gillette Police officers to eventually clear the room before the council returned to finish the meeting.

Dumbrill stood up to the podium and resigned his position as a municipal judge before criticizing people who have been protesting the mayor and council since former councilman Shay Lundvall resigned June 10. Lundvall resigned at the urging of the council after he had liked some offensive social media posts.

Since then, a vocal group of Lundvall supporters have protested the City Council twice and have urged the mayor and other council members to resign themselves, claiming they blackmailed Lundvall into giving up his elected seat.

Dumbrill said he couldn't stay silent on the issue any longer, and that his position as a local judge was in conflict with going public with his personal opinions, so he resigned and spoke up.

"I hearby resign my (position) as a city of Gillette municipal judge effective instantly, at this moment," he said. "I do this because I cannot address this assembly to cowards and liars without violating the ethics of judicial conduct."

Although people are allowed 2 minutes each during the public comment portion of City Council meetings, Dumbrill said he wanted a minute for every year he was on the bench. He then turned to face the crowd and address it directly.

In telling critics of the mayor and council that they're abusing their rights to free speech, he called them "cowards."

"I use that word because there are people in this room who want the liberty of speech and they aren't willing to pay the price for it," he said.

He goes on to angrily ask what those in the audience have done to earn their freedom of speech, which began a 10-minute back and forth that ranged from loud talking to shouting and name-calling.

"What have you people who have come here tonight to exercise your supposed rights of speech, what have you laid on the line as a sacrifice for this community?" Dumbrill asked.

"My ancestors have!" someone shouted back.

The interaction degenerated from there. Throughout the exchange, Carter-King attempted to restore order to no avail and about 5:15 into Dumbrill's speech, she adjourned the council to another room.

But that didn't phase Dumbrill or the crowd, who continued to yell at each other until a pair of police officers approached the former judge and informed those attending the council meeting that the room would be cleared.

"Bob Vomhof, you started this," Dumbrill said to Vomhof, who was in the audience.

Four of Vomhof's Facebook posts were cited by the city as among the offensive social media posts Lundvall had liked. He has since been among the leaders of a vocal group calling for Carter-King and the mayor to resign. He also organized a protest at City Hall prior to Tuesday's council meeting.

"I would like to thank everybody here for pushing this piece of trash out," Vomhof replied to Dumbrill.

As the room was cleared, one man had to be escorted out by police.

While the exchanges between Dumbrill and some others were heated, there were no physical threats. Some also urged civility.

Jerry Martinez was one of the dozens who attended the meeting, wearing a T-shirt that read, "Be good to people."

During the recess, he said people need to calm down and listen to each other, even if they don't agree.

"I can see both sides," Martinez said. "Everything needs to be a little more civil."

After the recess, the audience was allowed back into the council chambers and public comment about Lundvall's resignation continued.