Cody Stampede crowds down, competitors up 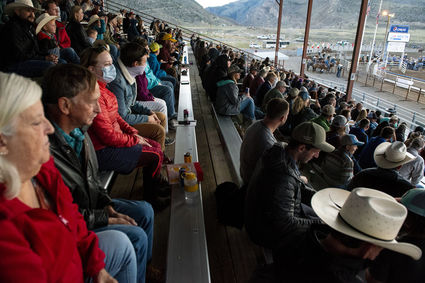 Empty rows in the general admission section of the Cody Stampede - every other row - were one of the precautions taken by event organizers so they could host the annual rodeo during the pandemic. The rodeo drew more competitors than usual, organizers said, because other rodeos across the region have been canceled due to the coronavirus.

POWELL - Amid the current pandemic, attendance at both the Cody Stampede rodeo and parade sank significantly from typical years. However, "it seemed like, all in all, it went well," Stampede Board member and Park County Commissioner Lee Livingston said Tuesday.

The number of entries for the Stampede parades dropped from around 150 a year ago to 93 and, among the four days of rodeos, only the July 4 event sold out. That was even with the arena limited to 2,835 people - less than half capacity - to reduce the risk of spectators spreading COVID-19.

"It was pretty spread out," Commissioner Dossie Overfield said of rodeo attendance. "There was a lot of people that just said, 'I ain't doing it.'"

However, the number of competitors surged.

The Stampede typically draws between 600 and 700 contestants, Livingston said, but this year, Livingston said there were close to 1,100 cowboys and cowgirls who vied for their share of the roughly $316,000 purse.

The area's marquee rodeo was the first big PRCA-sanctioned event since COVID-19 became a national health crisis, which prompted many appreciative athletes to flock to Cody.

"They're hungry," Livingston said of the competitors. "They need a place to go."

It had at one point been unclear whether there would be a 2020 Stampede at all. In late May, Gov. Mark Gordon and Stampede Board President Mike Darby announced it and five other major Wyoming rodeos would have to be canceled amid the pandemic. But the board ultimately decided to scrap only the separate Xtreme Bulls competition and go forward with the four-day Stampede rodeo.