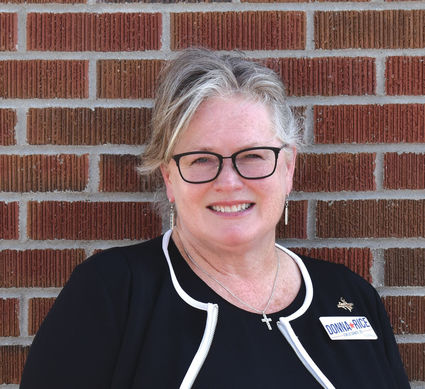 U.S. Senate candidate Donna Rice made a stop in Worland on Saturday to attend

Rice debated for a long time about whether or not to run for office this year, and announced her candidacy just as COVID-19 hit Wyoming in mid-March.

"It has been different but there are quite a few events actually happening," Rice said.

In her many stops around the state, Rice has been hearing primarily from voters their concerns about where the country is as a nation, and locally regarding jobs, COVID-19 recovery, along with concerns with energy in the state.

Rice has not held public office before, but she has worked with the Wyoming

State Legislature in clerical support staff roles and loved watching the legislative process which inspired her to go to law school.

"It has been in the back of my mind to run," Rice said. "I think what finally has prompted it is the state of our nation, I have grandkids that I really want to see have a free America and I am worried about where we are headed."

Rice has been a part of ministerial groups that work toward maintaining freedom such as the Family Research Council and the political arm of the Focus on the Family branch has given her the opportunity to go to Washington, D.C., periodically for conferences and even participate in a couple of briefings at the White House.

Rice feels her background with owning and growing up in a small business background will give her an advantage to help Wyoming through this hard time with COVID-19 recovery and oil and gas downturns.

Rice said, "I want to see those industries thrive still, but I really am in favor of diversifying the economy a little bit."

One of Rice's main priorities if she were to get elected would be to promote what she can to keep oil and gas going in Wyoming. Growing up her father worked extensively in

the oilfield and she understands how these changes have affected families throughout the state. Rice would look at regulations and determine which ones are reasonable and which ones are overregulation, and are seen as an overreach that leads to industries being shut down.

She also would like to look at taxes and would specifically look into more tax incentives and what can be done at a national and state level to help new small businesses over the first hurdles in order to help communities grow. Rice would also want to look at infrastructure and grow items such as better and more accessible internet to help smaller businesses grow.

Rice humbly believes her ability to listen is an important part of leadership, and the ability to listen to hear what the people she has been talking to in the communities are really saying and being able to convert that into the appropriate action in the legislative process.

"If you are representing people and you are never listening to what they are concerned about, how do you make good voting or policy decisions?" Rice said.

She feels she would be able to use this to her advantage when attempting to work with others in congress, as she has attended a statesmanship course that would help her be civil and do what is best in the interest of all the people.

Rice understands that she needs to hear from different industries such as ranching, mining, etc. prior to voting in order to understand the impacts on each industry before voting on policy.

She feels that the government has become too big and some of the decisions regarding businesses should be made by the businesses and brought more in to the local economy.