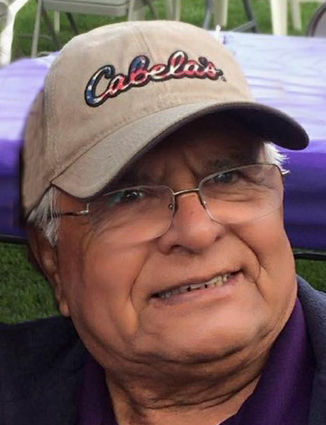 Sal R. Fabela passed away on August 6, 2020 at St. Vincent Healthcare in Billings, Montana with his family by his side.

Salvador Ramos Fabela was born on October 13, 1940 in Worland, Wyoming. He was the second of six children born to John Anthony and Carmen (Ramos) Fabela. He received his education in the Worland Schools. He served his country in the United State Army from 1959 through 1962 being stationed in Hawaii. After being honorably discharged, Sal returned home to his job with Burlington Northern Railroad where he worked for the next 36 years. Aside from his job, he served as a Union Representative for BNSF.

He married Jenny Arellano on June 6, 1965 at Assembly of God Church in Worland. The couple had three children, Steven, Tony and Valerie.

He formed the band "Sal and the Sons of Sound" in the 1960's. His music brought joy to so many people. He was a phenomenal trumpet player. He also shared his musical talent as a part of Mt. Calvary's praise and worship team and most recently with the worship team at the Victory Christian Center. Sal always felt honored when he was asked to play "Taps" for his fellow veterans who had gone to their eternal home. He provided that service for the last 50 plus years as a part of the American Legion Post #44..

After retiring in 2000 he spent the last 20 years fishing, camping and visiting with his children, grandkids and family. He loved watching sports and telling stories. He handled life's stresses with a great sense of humor. Sal's infectious smile will be missed terribly by a community where many considered him to be one of the true Worland Icons.

He was preceded in death by his parents, brother, John, and sisters, Belen Lucero and Rose Gonzalez.

Due to the recent COVID-19 outbreak, the family has decided to postpone services until a later date when family and friends can celebrate his life together without restrictions. Memorial donations may be made to the American Legion Post #44 or the American Diabetes Association and sent to PO Box 524, Worland, WY 82401. Online condolences may be made at http://www.bryantfuneralhomeonline.com.