BLM Leader not backing down 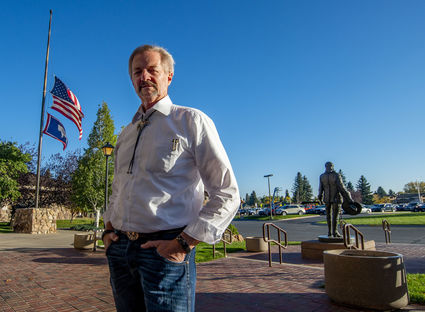 William Perry Pendley, deputy director of policy and programs for the Bureau of Land Management, poses for a portrait outside the Buffalo Bill Center of the West on Tuesday. A federal judge barred Pendley from continuing to serve as the acting director of the bureau last month, but he said the ruling has changed nothing.

POWELL - Two weeks after a federal judge in Montana ruled the Trump administration's choice to direct the Bureau of Land Management rose to his position illegally, William Perry Pendley told an audience in Cody that the decision has changed nothing.

Pendley paraphrased Mark Twain in saying, "News of my political demise has been greatly exaggerated," while speaking to the Free Roaming Equids and Ecosystem Sustainability Network conference on Tuesday at the Buffalo Bill Center of the West.

U.S. District Judge Brian Morris of Montana ruled late last month that Pendley had "served unlawfully" as the acting head of the BLM for 424 days, enjoined him from acting as the director and suggested any actions that Pendley took as director must be reversed.

However, Pendley said in a Tuesday interview that Judge Morris' decision "has no impact, no impact whatsoever."

"I have the support of the president. I have the support of the Secretary of the Interior and my job is to get out and get things done to accomplish what the president wants to do - which means increase recreational opportunities on federal land and to increase opportunities for jobs, so we can [economically] recover back to where we were pre-pandemic," Pendley said.

Department of Interior Secretary David Bernhardt temporarily authorized Pendley to carry out the duties of the BLM director in July 2019, and extended those orders multiple times.

President Donald Trump formally nominated Pendley for the position permanently in late July 2020, but withdrew his nomination in August.

Senate confirmation of the former oil industry lawyer and Wyoming native was thought to be a tough sell with testimony possibly affecting election results.

Pendley, who previously served in the Department of Interior during the Reagan Administration and in other high profile jobs, has made controversial statements about selling off public lands, and has a long history of actions and statements concerning Native Americans and other minority groups that have been described by his critics as being racist.

The Constitution's Appointments Clause requires the president to nominate, and the Senate then confirm heads of significant federal agencies.

On Sept. 25, in response to Bullock's suit, Judge Morris barred Pendley from continuing to perform the duties of the BLM director and also blocked Bernhardt from selecting another acting chief to temporarily fill the position.

Yet Pendley said Tuesday there have been no changes to his ability to lead the bureau, which oversees 245 million acres of public land, mostly in 11 western states and Alaska, with a workforce of more than 10,000.

"I'm still here, I'm still running the bureau," Pendley said, pointing out he has never been the acting director. "I have always been from day one ... deputy director of policy and programs."

Pendley said the suit was brought by Bullock in an attempt to hurt the Trump Administration.

"It's just an attempt - and we've seen this since, I don't know, 2016 - as an attempt to delegitimatize this administration," he said.

On Monday, Bullock asked a judge to negate three land use plans in Montana that would open most BLM land in the state to energy development, saying the documents were invalidated when the Trump administration's public lands boss was removed for being in the post unlawfully.

The list includes the approval of the Moneta Divide project, which would allow the development of up to 4,250 oil and gas wells in an area east of Shoshoni, in Fremont and Natrona counties.

If Judge Morris grants permission, even the bureau's decision to move its headquarters from Washington, D.C., to Grand Junction, Colorado, could be challenged.

But Pendley is proud of progress made in the past 15 months leading the BLM, including the move to Grand Junction, which "allowed me to jump in a government rig and run up here to give a speech today [in Cody]," he said. "On the way I stopped in Rock Springs and Worland. When I go back, I'll go to Casper and Rawlins - just to be out on the road and visit, see what we're doing in the field and see what help people need to get more work done," Pendley said.

He said the move was needed because 99% of BLM lands and 97% of BLM employees are in 11 Western states and Alaska, "but our decision makers were all in Washington."

About 550 positions were moved to Grand Junction in the past year.

"It allows us to be out here where the people are most directly affected by what we do," Pendley said.

On Tuesday, Pendley spoke at the conference and then toured the McCullough Peaks with members of the Cody Field Office, enjoying views of wild horses and meeting with regional leaders.

The office oversees 2.2 million acres of the northern Big Horn Basin, including portions of Park and Big Horn counties.

Pendley spoke of his pride of working with President Trump, who recently signed the Great American Outdoors Act, which fully and permanently funds the Land and Water Conservation Fund. The fund supports the protection of federal public lands and waters, including national parks, forests, wildlife refuges, recreation areas and voluntary conservation on private land. The fund was used locally to build Powell city parks and most recently helped improve the Powell Golf Club.

"When you think about the fact that five presidents and nine secretaries of the interior have passed through government and have not been able to get a permanent [funding] of the Land and Water Conservation Fund through, that's really quite miraculous," he said.

One of the most recent actions in Park County is the BLM's pending purchase of 1,820 acres of land on Sheep Mountain, west of Cody.

In an area traditionally suspicious of federal land purchases, the acquisition by the BLM to open hunting in the area was well received. The property is an important wintering ground for elk, deer and wild sheep as well as a popular place for hiking, hunting and horseback riding.

The fund will also be used to catch up on maintenance backlogs on federal property, including national parks.

Pendley said while the parks have more than $12 billion in backlogs, the BLM has a large backlog of deferred maintenance as well.

"It's obviously not the magnitude of the Park Service, but we have backlogs," he said. "And having those funds available so that we could increase recreation and how appealing our recreational lands are to visitors, that's huge."

He pointed out that at the height of the pandemic, people were going stir crazy wanting to get out and recreate.

"State parks were closed, forest lands were closed, but the BLM kept its lands open," Pendley said. "Every facility in Wyoming was open simply because of the hard work of BLM employees who said, we're going to do whatever we can to make sure those restrooms have toilet paper, the trash gets dumped and the doors are open."

Pendley thinks the interest in outdoor activity will survive after a vaccine is found and the pandemic is behind us.

Pendley is just one of several senior officials in the Trump administration who have run federal agencies and departments without Senate confirmation. The agencies have defended skipped deadlines on Senate hearings, saying the senior officials involved were carrying out the duties of their acting position, but not actually filling the position and didn't require a vote before the Senate.

The two have been in high profile positions in the Trump administration's immigration and law enforcement efforts.

Pendley said every administration for the past 30 years has done the same thing.

"It has been done for almost 30 years throughout all administrations," he said. "Republicans and Democrats, over the decades, have said they will designate somebody who's in the chain of command, as exercising the authority of the assistant secretary, or the director, so that person has the authority to sign something, and we can move on with life."

Opponents are watching the Pendley case closely, hoping to use the precedence set to undo actions taken by Wolf and Cuccinelli. The Trump administration has said it will appeal Judge Morris' "outrageous" decision.