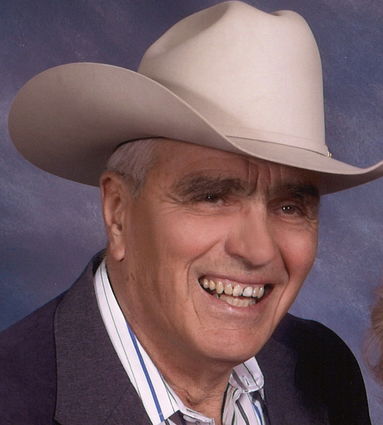 The son of Ralph and Hazel (Sneider) Campbell, he was born May 16, 1933 in Thermopolis, Wyoming. He graduated from HSC High School. He received a degree in Animal Production from the University of Wyoming. During college he joined the Wyoming National Guard.

While serving in the US Army based at Fort Knox he met a Department of Army civilian worker Barbara Jean Alvey. On June 7, 1958 they were married at Pritchard Place Chapel in Fort Knox Kentucky. In July, the couple moved to Thermopolis & Joe began operating the family ranch.

Ranching was his mission. He was a natural at breaking many a savvy cowhorse. Joe was always into leading edge cattle production, early on using computers & A.I. to breed select cows. He took great pride in raising champion show steers. Often one could look up to find Joe soaring above in his plane wrangling in horses, gathering cows, dropping lunches or salt blocks and checking wolf/ grizzly activity on his or the neighbors' herds.

Joe was a real estate broker selling ranches through Homestead Realty, which he owned. He was very civic minded serving on a multitude of boards including: REA, TCT, HSC School Board, Farm Bureau & Owl Creek Irrigation. In 2016, he was inducted into the Wyoming Cowboy Hall of Fame.

Cherishing his memory is Barbara, his wife of 62 years; children, Carolyn (Mike) Conner and Chris Campbell both of Thermopolis, Kathy Campbell of Morristown, AZ, Connie (Greg) Hoffman and Belinda (Ray) Moore, both of Thermopolis; fourteen grandchildren, twelve great-grandchildren, a niece and two nephews. Joe treasured spending time with his family. He was preceded in death by his parents and brother, Donald.

Memorials in Joe's name can be made to T-Town Cancer Crusaders, People for People or a charity of choice.

Mortimore Funeral Home is assisting the family. Online messages may be offered at http://www.mortfh.com.