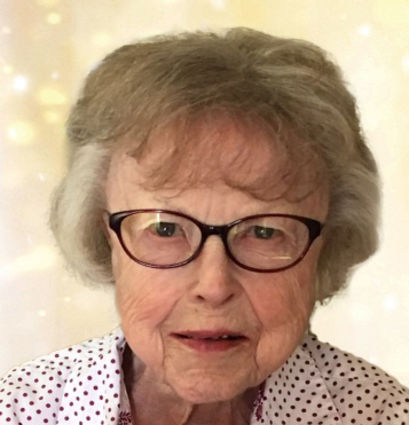 A Rite of Committal graveside service was held for Mary "Ione" Craft on November 4, 2020 in Greybull. Ione passed away the morning of October 27, 2020 at South Big Horn County Hospital. She is now at rest next to her husband of 68 years at the Donald J Ruhl Memorial Cemetery.

Ione was born on February 20, 1925 in Bowman, North Dakota to John Edward and Mary Della Schmeltzer. Her father was a farmer and when drought and the depression took its toll the family relocated to Milbank, SD. At the age of 15 through a test at school, Ione tested positive for tuberculosis. She spent the next three years in a sanatorium near Custer, SD nearly 500 miles from home. Toward the end of her stay her family relocated to Spearfish, SD. When Ione was able to leave the "San", as she referred to it, the family moved to Wyoming and she graduated from Worland High School at the age of 21.

Ione worked for a time at Security State Bank in Basin and then began work at Stockgrower's State Bank in Worland. Helen Craft a coworker and friend introduced Ione to her brother Bill upon his return from serving in the army. After a courtship which involved two proposals, they were married on January 21, 1950. They began their married life and within ten years had been blessed with nine children. They lived on a farm near Manderson. Consecutive years of hailed out sugar beet crops forced them out of farming and an era began when they purchased Paintrock Lodge in the Big Horns.

The next 44 years of Ione's life were spent at the lodge. Each year from June through hunting season in November Ione cooked, cleaned and hosted hundreds of guests. She and Bill built Paintrock into a destination for guests from all over the country and Ione's culinary talents were known far and wide. The five month stint each year was demanding and she relished her time off the mountain during the winter and spring months. She enjoyed frequent visits and phone calls from her family, single batch recipes, daily Mass and spending time with the church ladies, delivering meals on wheels, volunteering at Bonnie Blue's, her yard and garden and annual trips to sunny destinations with sandy beaches. Finally at the age of 80, Ione was able to retire when the keys to Paintrock were turned over to a new owner.

Ione's greatest joy in life was her family. With nine children and their spouses she was blessed with 24 grandchildren and 47 great grandchildren. Ione welcomed each new baby like it was the first and she reveled in the gift of being a mother and grandmother. She said many times over the years how grateful she was for her big family because she "would never be alone." Nothing made her happier than when her family gathered. It meant everything to her.

She taught her daughters the importance of "being ladies" and was a shining example to her sons of what an exemplary wife should be. She was the enforcer of the "Shut up" and "Grammar" jars and didn't mince words when discipline was in order. When adolescent grandchildren were in need of guidance, letters were penned and sent which generally brought immediate change to the behavior in question.

A woman of great faith, Ione lived her life with wisdom, grace, simplicity and compassion. She loved all of God's creatures and in particular dogs, all of which in her care lived long past their life expectancy. Selfless, intelligent, funny and the glue that held her family together, Ione was a remarkable woman.

Her only regret in life was not learning to play the piano which she assured her family would take place once she was in Heaven.

She joined her husband Bill and daughter Annette in Heaven along with her parents, her siblings and their spouses. She is survived by her brother in law Claude Craft, sons Billy (Marva) Craft, John (Deb) Craft, Ed (Julie) Craft and son in law Craig Gersmehl and daughters Mary (Mark) Butler, Julie (Chris) Perry, Connie (Tom) Gustafson, Diane (Jerry) Breed, and Dorean Fink. Her legacy is intact with an outstanding group of talented and successful grandchildren and their spouses along with a dandy crop of up and coming great grands.

A memorial fund to St. Jude's hospital has been established. Donations can be made payable to St. Jude's and sent in c/o Atwood Family Funeral Directors, 620 Greybull Avenue, Greybull, WY 82426.

Ione's family wishes to extend their deep appreciation to the staff at Bonnie Blue Jacket Memorial Nursing Home for their love and care of their mother over the past five years.