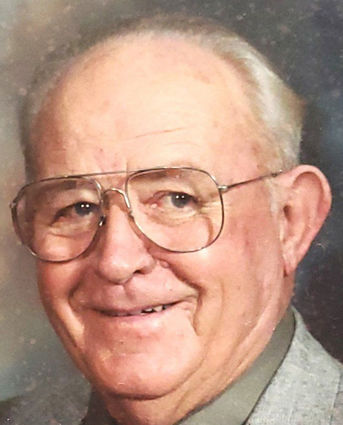 World War II Veteran Robert K. Hensman, 95, went to be with his Savior on November 21, 2020. He was living at the Worland Healthcare and Rehabilitation Center. Robert was born June 14, 1925 in Wallace, Nebraska, the oldest of two sons born to John W. Hensman Jr. and Marion (Ames) Hensman.

Bob attended elementary school in Cheyenne, Wyoming and graduated from high school in Red Cloud, Nebraska, class of 1942. He was a member of the football team, baseball team and choir. He attended one semester of college at Hastings before he enlisted in the United States Army Air Corps in July of 1943. He began his training at the Jefferson Barracks in Lemay, Missouri. Bob continued training at the University of Minnesota; Santa Ana, California; Thunderbird Field in Phoenix, Arizona and Minter Field in Bakersfield, California. In November 1944, Robert received the silver wings of a pilot at LaJunta Army Air Field, Colorado, advanced two-engine school of the AAF Training Command, graduating as a 2nd Lieutenant. Robert then graduated from the photo reconnaissance pilot school at the Coffeyville, Kansas Army Air Field April 14, 1945. He was trained to fly the famed P-38 Lightning. In combat, his duties were to fly over enemy territory and return to his base with photographic evidence of enemy activity.

At the end of the war, Robert returned to Nebraska and attended Wesleyan University. He graduated in 1952 with a BA in Education, Music and Social Studies. Robert was a member of the Gamma Gamma Gamma Fraternity and sang in the Wesleyan Chapel Choir. Bob married the love of his life, Shirley Meyer on December 23, 1950 and they settled in Red Cloud, Nebraska. Two years later in 1952 Robert and Shirley settled in Wyoming after Bob received a position as a music teacher at the middle school in Worland. He later earned a MA in Counseling and became the middle school Counselor. Their first son Kent was born February 16, 1956 and their second child, Mark was born February 27, 1958. Robert retired in 1985 after 33 years with the Washakie School District #1. After retirement, Bob and Shirley traveled to many countries and states and then settled in Leisure World in Mesa, AZ until they returned to Worland in 2000. Bob and Shirley celebrated 69 years together.

Bob was a member of the First United Methodist Church where he and Shirley sang in the choir. Bob enjoyed golfing, fly fishing, hunting, playing bridge, traveling, working in his flower and vegetable gardens and spending time with his grandchildren and great-grandchildren.