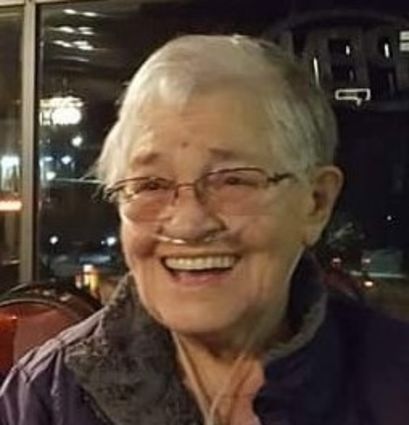 Huella Francis (Griffith) Darling of Thermopolis, WY, passed from this life on Dec. 2 at the Hot Springs Health, surrounded by family members. She was 97.

Huella Darling was a teacher, a life-long learner, nature lover, world traveler, informed visionary, relationship builder, and lover of ice cream, who hailed from the Show-Me state of Missouri. She was also a wife, mother, grandmother, and active great-grandmother.

Huella was born on a farm in northern Missouri on July 16, 1923, to Richard Hugh and Nelle (Shaw) Griffith. Her parents were farmers in the years before electricity and in-door plumbing. She left home at age 12 for high school, graduated at 16 in 1939, earned her teaching certificate at age 18, and started her teaching career in one-room schools.

She continued her education at North Missouri Normal School and Commercial College in Kirksville, Missouri (now Truman State University) and earned her B.A. in Business in 1946. She met Martin E. Darling at Kirksville and they were married May 28, 1947. Their first child, Patricia Ann, came along the next year, along with teaching jobs in Basin, WY. Huella taught business classes, and Martin was a basketball coach and teacher. They made lifelong friends and enjoyed camping trips in the Big Horn Basin and Yellowstone. Deborah Donnell Darling was born in Basin in December 1952.

After working for State Farm Insurance in Lincoln, NE, in 1954, they returned to teaching in Douglas, WY, where third daughter Mary Jane was born in May 1958. They moved to Thermopolis in 1960 where they began working on M.A. degrees. Huella got hers in Computer Science from Colorado State University, Martin in Library Science. She retired in 1990 after 46 years.

Huella was active in Wyoming and national Business and Vocational Education organizations. She served as President and board member of Mountain Plains Business Association and Wyoming Business Education Association. She received recognition from State Teacher of Teachers, Wyoming Business Education, Future Farmers of America, and National Business Education Association. She was a member of Delta Pi Epsilon and believed in their motto: "I touch the future, I teach." She took pride in touching the lives of so many students. She also belonged to PEO, Delta Kappa Gamma, Women's Auxiliary (V.F.W.), the Hospital Auxiliary, DECCA, and was a member of Community Federated Methodist Church. She was a lifelong Democrat and served as delegate to the state convention.

Her hobbies included playing bridge, reading, needlepointing, fly fishing, and looking for rocks and American Indian artifacts. She collected Western art and antiques. In retirement she and Martin explored 48 of the 50 states and traveled to the British Isles, Spain, Morocco, New Zealand, Australia, and Panama Canal.

She was preceded in death by her husband, Martin E Darling (d. 2009), her parents Nelle and Hugh Griffith and sister Dorothy Porter.

Memorial / Life Celebration is planned for July 11, 2021, in Thermopolis, WY.

To honor Huella Darling, in lieu of flowers, financial gifts can be sent to the ENDOWMENT EDUCATIONAL SCHOLARSHIP Endowment Fund at P.O. Box 1297, Thermopolis, WY, 82443, marked for Huella and Martin Darling. The scholarship fund helps local high school graduates with their college and vocational degrees.

Cards and letters of condolence and favorite memories can be sent to Darling's, 1122 Broadway, Thermopolis, WY, 82443. Memories will be read at the Life Celebration in July. Online condolences may be made at http://www.bryantfuneralhomeonline.com.