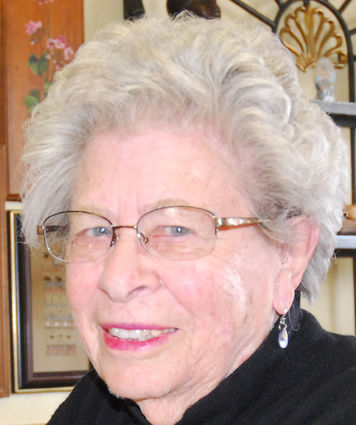 Ruth Puebla Bower, 100, passed away on January 2, 2021 at the Worland Healthcare and Rehabilitation Center.

Ruth was born in Casper, Wyoming on April 13, 1920. She was the oldest of three children born to Arthur and Violet (McDonald) Puebla. Ruthie joked that affordable housing was not readily available in Casper, but there were homes in the Sandbar Section. This was the only part of town her parents could afford (it was inhabited by Notorious Women.)

Her dad, Arthur Puebla, worked on the Wassenberg place as stoop laborer, topping sugar beets. He had come from Mexico when he was 10 years old on the Railroad with a man, maybe his father, and grew up on the western slope of California. Violet and Arthur Puebla had three children, Ruth, Donald Puebla (Pearl Marle), and Nancy (James) Seamster.

She said her dad was one of those people who did not stay in the same place for long. In 1935 he moved the family to the Wind River Canyon (Barney Smith) Gas station, Store and Cabins. They later returned to Worland where she attended school graduating in 1937. They wore uniforms which Ruthie liked. She loved school. After graduation, she attended a business school in Chillicothe, Missouri for 3 months, taking Commercial/Business subjects. She was a good student and typed 120 words a minute. She quit school because she felt she knew everything she needed to know!

Ruthie later trained to be a telephone operator. Since there was not a job opening in Worland, she went to Casper and babysat. She applied to the editor of the Casper paper, and he advised her to do something with herself so she would look "older." She returned to Worland and got a job with the Credit Bureau receiving $5.00 per week, and so she went back to the Telephone Office. Later she landed a job with Davis Lumber for $30.00 per month and ended up working for Ed Green for $60.00 per month for the next three or four years. She took a test for a government job in Cheyenne, issuing licenses and was immediately hired. When this job closed, she moved to Denver where she worked for the Civil Aeronautics as a clerk. Working her way back to Worland, she then got a job in Casper with Oil and Gas. Returning to Worland one last time where she went to work with County Assessor, Martin Martenson.

When she was sixteen, she told her mother that there were two things she wasn't going to do: 1. Live in Worland 2. Marry a farmer but she did both. She once commented that her biggest regret was not appreciating her parents when she was a teenager and thinking her mother didn't know anything.

Ruth and Ken had gone to high school together and met again in 1947 when Ruth was 27. Ken was separated from Silva Burton, but not yet divorced. They met in a bar. She remarked that Ken passed a bad check for $125 in the Cheerio Bar. On April 26th, 1947 they went to Bozeman, Montana and were married by a Lutheran minister. She said that their marriage was the best thing that ever happened to her. They were married 52 years when Kenneth died in 1999.

Ruth was known to those from this area as, Ruth, or Mrs. Bower, but she was Mom to her children, Roger, Tom, Ruthie, and to the four older kids. They were always, all HER children.

She and Ken had been married just a little over 2 years when his 4 older children came back home to live. Burton (Burt) was the first to move home in 1948, the year Roger was born in July. The girls, (Barbara (Pape) Peggy (Foster) and June (Lang), came back in 1949 with their mother and after their house burned down, went to live with Dad and Ruth, shortly before Tom was born in August of 1949. Because of her youthful appearance, Ruthie looked like one of the kids in a picture taken of her with the three girls. She was only 15 years older than Barbara. What a remarkable woman she was to take on that responsibility! She was always incredibly supportive to all the children, never doing work projects for them, but supported them and expected them to complete any project or lesson on their own. This included 4-H sewing, schoolwork, records, etc. It might be said that her children were raised knowing that there was a right way, a wrong way and Ruthie's way. She was a strong disciplinarian who instilled values of truthfulness, respectability and commitment. She taught a strong work ethic, love and respect of family. "If you assume a project, you complete it to the best of your ability", was a saying often heard in her home. Some examples being: When sewing in 4-H if the seams were not on line, they would be taken out and done over until they were right. There was a time the girls were supposed to give a demonstration and did not want to do it. Ruthie, from the Hospital having just delivered Tom, sent word home, "You are going to do it" and she did. When preparing for style shows it seemed to them that they walked miles (maybe not that far) with books on their heads.

Ruthie, herself, claimed to be opinionated about politics and parenthood, (which she learned after marriage and loved it.) She was always frank and open; she always knew who she was.

She often quoted the advice given her by her father-in-law, Earl Bower, who she respected as a very understanding gentleman, and who had commented when sighting a bill presented by the Farm Bureau (which did not pass), "If anything is good it will come back.'' "Be honest and do a day's work".

She had a sense of humor and a funny side as well. She loved a good joke and accepted if the joke was played on her by her children.

She loved pretty shoes and was somewhat distressed when the three girls played dress up and cut the straps on some of the shoes. Her three great-granddaughters reenacted this event at Ruth and Dad's 50th wedding anniversary. The laughter came easier the second time around!

She treasured the trips she and Ken took after the children left home, she said each was a honeymoon. They traveled in Africa, Scandinavia, China, Australia and New Zealand, and also took a bus tour around the United States.

Her many hobbies included knitting, needlepoint and counted cross-stitch. She loved baking a variety of cookies, cakes and pastries for family, church, community functions and fundraisers. She collected many treasures: hat pins, ink wells, bronze sculptures, paintings, Hummel's, doll house furniture which she lovingly displayed on shelves in her living room.

She was well known in Worland for her volunteering and contributions to the community, carrying each with great interest and responsibility. She and Ken were continually active in politics, church, Farm Bureau, through 30 years of her life she was recognized as a career woman, farmer's wife, mother, community volunteer for school and hospital board member, and recognized as a Community Angel and Unsung Hero by the Washakie County Homemakers in 2015.

She was Ten Sleep Ambassadors' Volunteer of the Year. She served on the Worland School Board, Washakie Memorial Hospital Board (She said she had never done anything so interesting in her life). She never lost interest in serving on this board and only missed two meetings during her long term. She was a devoted member of the Hospital Auxiliary serving for over 60 years to area healthcare. She also held memberships including in the Colter Community Homemakers Extension Club, Town & Country Homemakers: Farm Bureau Committee for Talent Find to raise money for Scholarships for UW Home Economics majors, Hosted International Farm Youth Exchange Students, 4-H Programs, Young Farmers Trainee Program, Washakie County Fair Board, Republican Women's Club, State Republican Party, St. Albans Episcopal Committees and diocese committee person.

As per Ruth's wishes, cremation has taken place. A Celebration of her life will be held at St Alban's Episcopal Church when we are once again able to gather. Memorial donations may be made to Washakie Hospital Foundation and sent to PO Box 524, Worland, Wyoming 82401. Online condolences may be made at http://www.bryantfuneralhomeonline.com.