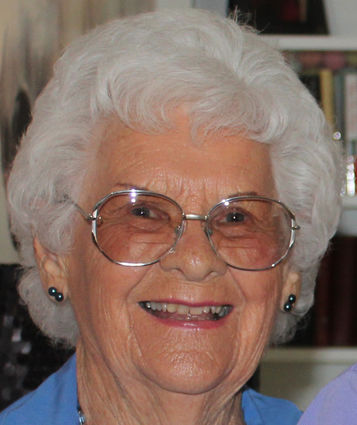 Shirley Margaret (Bower) Goodrich passed from this earth on Monday, December 28, 2020 at the Douglas Care Center in Douglas Wyoming. She would have turned 94 on January 10, 2021. She was born Monday, January 10, 1927 to Rollin James and Beulah Dorothy (Albert) Bower in Worland, Wyoming. She spent her young life on her father's farm in Worland along with brothers Warren and Dennis. She was surrounded by numerous aunts, uncles and cousins. She graduated from Worland High School.

Upon high school graduation in 1944, Shirley traveled to Columbia, Missouri to attend Stephens College, where she graduated in May, 1946. Then onto the University of Wyoming where she graduated in May, 1948 with a Bachelor of Arts in Education. She was a member of the Alpha Chi Omega Sorority. Shirley did her student teaching in Wheatland, Wyoming.

While at the University, Shirley met Henry Charles "Hank" Goodrich and they married on September 11, 1949. After Hank's graduation from the University, they moved to his hometown, Douglas, Wyoming. Shirley and Hank lived in their home on North 7th for well over 50 years. Shirley and Hank welcomed three sons, Kirk, Mark, and Bret and one daughter, Nancy. After raising her kids to school age, Shirley began teaching in 1962 with her first kindergarten class. In 1964 she moved to teaching first grade and retired from the Douglas school system as a first-grade teacher in 1989.

Shirley loved to travel and toured much of the United States, Western Europe, Egypt, South America, Australia, and New Zealand. Another of Shirley's loves was playing bridge at the Douglas Community Club with her long-standing ladies' bridge club. She often won high hand and was very proud of the fact. Shirley could be seen on any given day walking with her dog on the Douglas streets. She was a beloved member of the community.

Inurnment will be at the Douglas Park Cemetery along with services at a later date.

The Gorman Funeral Homes – Converse Chapel of Douglas, Wyoming is in charge of the arrangements.

Condolences may be sent to the family at http://www.gormanfh.com