Lady Warriors head into state as No. 3-seed 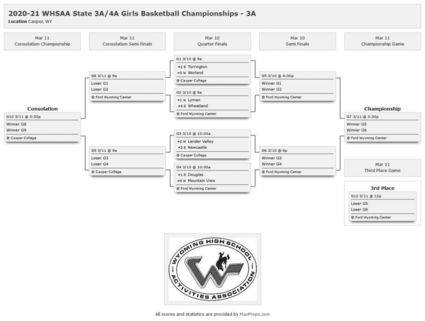 WORLAND - The Worland Lady Warriors are back in the 3A State tournament and are among the eight teams battling for a state championship Wednesday and today in Casper.

The Lady Warriors enter the tournament as the No. 3-seed after defeating the Mountain View Lady Buffaloes 44-31 in the third-place game at the 3A West regional tournament in Powell.

"Mountain View is really good and has had a great season," said WHS girls basketball coach Ben Hofmann. "We wanted to get a good start right out of the gate, and we did. I thought more than that, we wanted to defend and rebound, and we did that well. Mountain View is one of the better rebounding teams in our region.

"They're not very tall, but their guards do a nice job of attacking the glass. But Denali [Jones], Darla [Hernandez], Ajiah [Montoya] and our guards did a nice job cleaning up rebounds in the first half and didn't give them many second-chance opportunities. I was really pleased with that."

The third-place game between Worland and Mountain View was highly competitive as neither team wanted to open their state tournament playing the Douglas Lady Bearcats. Douglas has won the past two 3A State title, is undefeated this season and beating teams by an average of 40 points a game.

With the win over the Mountain View, the Lady Warriors earned the No. 3-seed out of the West and, provided that they win, wouldn't face Douglas until the championship game.

The Lady Warriors jumped out to a 22-7 lead in the first half against the Lady Buffaloes in the early morning contest at Powell High School on March 6.

Worland's defense carried them through the first half as they only allowed three made field goals from Mt. View.

"We knew we had a size advantage. Mountain View has one tall girl, the [Bailey] Henstra girl is really good and can match up with us. But outside of her, they didn't have anyone else who could match up with either Darla or Denali. We wanted to make sure that our guards were sprinting to their closeouts and making them put the ball on the deck, then adjusting and helping out from there and rebounding the basketball once that shot went up.

"That was the No. 1 thing for us, if they got three, four opportunities to score, it was going to be a long game for us. The team worked really hard to secure the defensive glass," said Hofmann.

As Hofmann said, Mt. View is a good basketball team, and in the second half, they made their runs and cut into the Lady Warriors lead. In the third quarter, Mt. View cut the deficit to 10 and got it down to six points in the fourth.

Those two runs were the closest the Lady Buffaloes came to taking the lead, and after weathering the storm, the Lady Warriors built the lead back up.

"Be strong with the basketball, patience, go through our reads and our looks and where we want to go with the basketball. Kind of like a quarterback going through their reads, and we have a certain amount of that when teams press us," said Hofmann. "It's an area that we've got to clean up because we have a propensity to have a little bit of a letdown, or we don't want the basketball."

Getting to the third-place game, the Lady Warriors first had to get by the Lovell Lady Bulldogs on March 4 at Lovell High School. After a hard-fought first half, the Lady Warriors pulled away in the second half on their way to winning 49-39 and qualified for the state tournament.

Hernandez had a game-high 15 points against Lovell, shooting 7 for 14 from the field with five rebounds, two assists, two steals and two blocks. Crippen added 12 points on 3 for 4 shooting and going 6 for 7 from the free-throw line.

"Lovell is a good ballclub, and they're well-coached. To beat a team three straight times is difficult to do, especially on their home court. They play really hard. You look at the Lander/Powell game, and that was a close game too, closer than many thought.

"Lovell had a good defensive game plan and a good plan on offense. We were just able to make a few more plays in the third and fourth quarters. A lot of credit to Lovell, and I knew it was going to be closer than most people thought. I was proud of our girls for the way they responded, knowing it was going to be difficult, and they still competed and did a nice job," said Hofmann.

Denali Jones was the lead scorer for Worland versus Lander, with 15 points going 7 for 10 with 11 rebounds. Hernandez chipped in 10 with five rebounds and five assists.

The Lady Warriors opened the 3A State tournament against the East's No. 2-seed, the Torrington Lady Trailblazers, on Wednesday at Casper College.

"They're a great weakside rebounding team. They love to work the weakside offensive glass. They've got a couple of girls that are a matchup issue for us. They've got three girls who can match up with ours skill-wise and athletically. We're going to have our hands full.

"We've got to rebound the basketball as a team. We've got to defend better than we did when we were down there. Then we've got to handle pressure because we'll see some full-court and half-court pressure," said Hofmann. "If we can do those things and value every possession, we'll put ourselves in a good position."