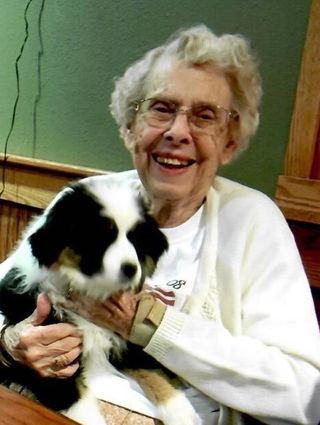 Maurine "Dee" Janet Olson passed away on March 16, 2021 at Primrose Retirement Community, Gillette, Wyoming with her family at her side.

Dee was born August 27, 1924 to Stella Milner and Fred Baker DeWitt in Griswold, Iowa where she resided until graduating from Griswold High School in 1942. Dee then attended Iowa State Teachers College where she obtained her degree in physical education teaching.

After graduating from Iowa State Teachers College, she moved to Boulder, Colorado to pursue a degree in business. However, her educational pursuit was soon interrupted by the pursuits of Donald "Don" Olson. They were married on August 9, 1953 and soon after moved to Orem, Utah to start their careers and their family. Dee taught basketball to high school students while in Orem and Don was an electrical engineer at a steel mill.

It was during this period in their life that Clifford (1954) and David (1957) were born. Their life in Orem, Utah came to a halt when the family moved to Odessa, Texas in 1966 for a career move for Don. The family then relocated to Snyder, Texas in 1969 for an advanced job opportunity for Don. Dee began to substitute teach while in Snyder in various subjects including Physical Education.

After excessive exposure to +100-degree temperatures and dust storms Dee and Don decided it was time to head back up the mountain country that they both loved. Thus, in 1971 they packed their bags, children and black Labrador "Scratch" and headed to Longmont, Colorado. While in Longmont Dee was again a substitute teacher at the junior high and high school level in various subjects.

In 1980 Don and Dee moved to Hanna, WY for another career opportunity for Don. While living in Hanna, Dee was employed by the county as the clerk of the district court. In 1986 both Dee and Don retired from their careers and moved to Worland to be close to the Big Horns and Don's father, Emmett Olson.

After the passing of Don, Dee made the decision to move to Gillette, WY to be closer to her family. Dee resided at Primrose Retirement Center in Gillette from 2015 until her passing in 2021. During her stay in Gillette, she was visited by many family members, including son and daughter-in law Clifford and Kathy Olson. Happy hour, at Primrose on Friday with family, wine and friends, was something Dee enjoyed very much.

Dee's hobbies included photography, candle making, camping and being with her friends and family. Mountain climbing was also a favorite activity of hers in Colorado; she climbed Longs Peak five times! Dee was especially fond of camping at Boulder Park in the Big Horn and made many friends there while camping.

Dee was preceded in death by her parents, one grandson, Billy, her sister, Dorothy, and husband Don. She is survived by her sons Clifford (Kathy), David (Carolyn), four grandchildren and five grandchildren.

Dee was a very outgoing, loving and jovial individual. Everyone who met Dee fell in love with her. She will be dearly missed by her family and friends.

Funeral services will be 10:30 a.m. Friday, March 26, 2021 at the United Methodist Church with Pastor Kayilu Pfoze officiating. Visitation for friends and family will be held one half-hour prior to services. Burial will follow at Riverview Memorial Gardens Cemetery. Online condolences may be made at http://www.bryantfuneralhomeonline.com.