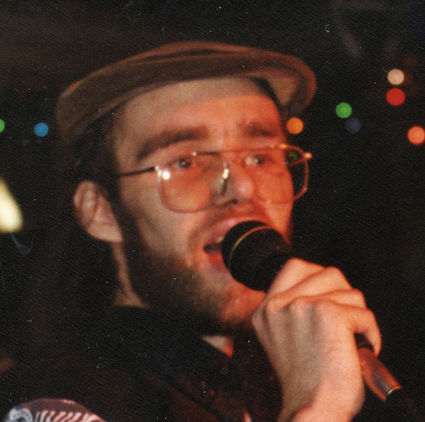 Joseph Merel Isger, 47, went to be with his Savior on March 28, 2021 after a long courageous battle with Myotonic Dystrophy. Joseph was born on January 23, 1974 in East Stroudsburg, Pennsylvania to Joseph Harold and Diane Lucille (Valeski) Isger. He was welcomed home by big sister, Nancy.

He spent his early years in Pennsylvania before moving to Cody, Wyoming where he graduated in 1992. Following graduation, he attended Northwest Community College in Powell for a short time. During his last high school years and early adulthood, he worked at several restaurants, including Granny's, The Irma, and his favorite, Cassie's Supper Club. At Cassie's, he held many positions, from dishwasher to kitchen manager to karaoke singer! In 2011, after a fall at work, Joseph's world changed rather drastically. At first, he wanted to deny everything about it, but as he slowly came to grips with his new life, he looked for ways to succeed. He had a photographic memory of sorts and could easily memorize trivia and other fun and odd facts. He kept his attitude positive by sharing this knowledge with visitors and caregivers. He was an avid reader and read all the Louis L'Amour books. He relocated to Worland where he lived at the Apple Apartments until 2014, when his mother took him into her home to become his primary caregiver. Upon meeting Joseph, he may have seemed a little reserved. Once you got to know him, the game was on, one of teasing, quizzing and competing in contests of trivia. One of his last challenges to himself and a friend was to find a biblical name starting with every letter in the alphabet...only two letters were left. He left a legacy of tenacity, positivity and love. Those who took the time to know him will surely miss him!

Cremation has taken place. There will be a celebration of Joseph's life later this summer. Memorial donations may be made to Victory Christian Center or the Worland Senior Center and sent to PO Box 524, Worland, WY 82401. Online condolences may be made at http://www.bryantfuneralhomeonline.com.