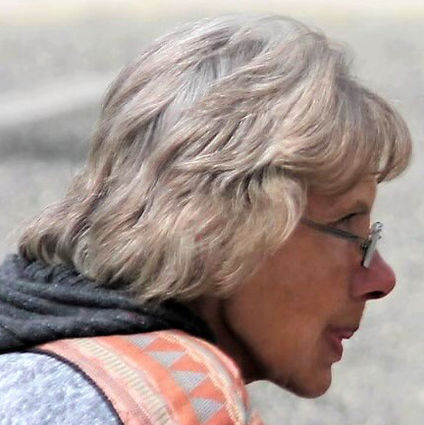 Debra Ann Larkins "Debbie" Or "Deb" If you thought you were going to call her "Debra" you had another thing coming. "Only my mom can call me that and you as sure as hell aren't my mom." (It was one of those moments, that had you been standing there... all you could do was think *Awkward!) I do believe her most favorite title was "Grandma".

Deb was born June 12, 1955, to Leslie & DiAnn Quinn in Rapid City South Dakota. She was the oldest of three, Robert and Rick Quinn. In 19?? (no one seems to know) The Quinn family picked up and moved to Wyoming. Debbie Graduated in 1972 from Greybull High school. She briefly worked for Blue Jackets and Wy text out of Cody. She met her soon to be husband Tone Larkins in Worland Wy in the winter of 1973. I asked Tone how they met. *In Grandpa voice "I met her in the damn bar! I had no idea she was only 17! I mean she was in the BAR! I could've been in jail!" Tone and Deb married April 19, 1974, and soon welcomed their first and only child Colt Shawn Larkins.

Tone worked for Holly Sugar as a mechanic & Deb worked a series of jobs from Montgomery Ward, Gibson's, Case international, Daily news, The shirt shack & managed the Mini Mart store for more than 9 years. Tone worked his shifts & then went wherever Deb was to help her move or carry things to her next event. Tone said "That's what I do... I carry the boxes."

December 3, 1998, Deb & Tone welcomed their first grandson Coy Callaway Larkins. From the time she set her eyes on him she knew Grandma was the perfect gig. She was a fantastic grandmother making sure Coy was always happy & comfortable; whether it be letting him gnaw on her knuckle to pacify him or making kissy sounds on his neck until he giggled so hard, he would scream. She made sure her time with him was not wasted. 17 months later May 24, 2000. She welcomed her second grandson, Zade Gavin Larkins... She was intoxicated with love. She carried that baby as if he were her first treating him as so. Her knuckle surely paid the price. All the while never forgetting that Coy was running around at her feet. She was truly in love.

Zade was only months old when she opened "The Coffee Shop & Antique Outlet". She finely got to show her love for antiques. She loved her black mammy butter churn, carnival glass, trunks, stoneware, and Christmas tree costume jewelry. You could buy essential oils, herbs, vitamins and have lunch in the back or order a handmade cake! She continued working at mini mart & kept books for the sale barn. She closed the door to "The coffee shop" only to reopen a new store "Antiques, etc." She finally found her dream job & a friend to share her love of antiques with, Mr. Bill Smith. On her free time, she decided to work some more becoming the president of the chamber for 3+ years. She was on the business event committee, she was involved in the parade of lights, Hunter fest and played a huge roll in getting Worland's digital sign. If that wasn't enough, she was the president of Youth baseball and in Deb Coronado's words "She was the one person instrumental in getting girls fast pitch softball back to Worland." She loved baseball! Watching and following her son and then grandsons play was her passion. She organized tournaments, vendors, hotel stays, umpires, announcers and so much more. She even traveled to Colorado to watch her grandson Coy play at a collegiate level. She was so stinking proud.

In her last days she was busy getting ready for Worland to host state Sr. Babe Ruth baseball. She loved her Blue Jays so very much. If she pointed her finger at you and said, "You better not!" that just meant she was watching you and you certainly had a place in her heart.

Grandma loved fierce and fast, and the good lord took her that way too. She wouldn't have had it any other way. June 5, 2021 at around 9:30 a.m. Grandma had a heart attack. At 4:35 p.m. Grandma decided to forever drink good coffee, have the best Swedish fish, lava cake brownies topped with ice cream and watch us play the game of life from the announcer's box. She is terribly missed and will forever be in our hearts.

Debbie is reunited with her baby brother Rick, Grandpa & Grandma Hershly and her favorite dog Crissy. Cremation has taken place. Friends and family can attend Deb's service at the Community Complex Center on Thursday, June 10th from 3-5 p.m. Flower arrangements can be sent to the Community Complex Center @ 1200 Culbertson. In lieu of flowers donations can be made to Tone Larkins @ P.O. Box 1148 Worland Wy 82401.