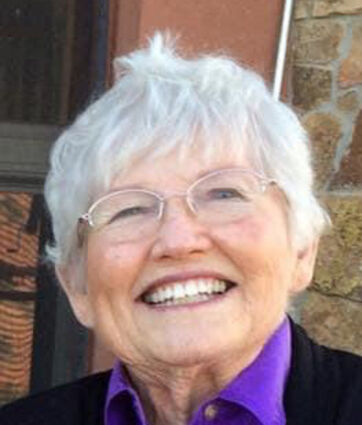 Mary Joyce Klingler, 82-year-old longtime Worland resident gained her independence from sickness and pain when she slipped peacefully into eternity on July 4, 2021, at the Washakie Medical Center in Worland. Her loving family was at her side just as they had been since May.

Mary was born in Corpus Christi, Texas on May 16, 1939 to Verda and Della (Bates) Franklin. She was welcomed home by her three older sisters, Winnie, Gerry and Louise. She attended school in Corpus Christi, graduating in 1957 from WB Ray High School. She was married later that same year to Carol Gene Klingler on November 30, during the Thanksgiving break. The couple attended school in Abilene while awaiting the birth of their first daughter, Julie. Gene received his first court appointment in Window Rock, Arizona, so the little family relocated. When Gene received his next appointment, little did the family know they were moving to their forever home, Worland. Ginger and David were both born in Worland, making their family complete.

Mary embraced motherhood with the finesse of a saint! She had a very gentle way of reprimanding her children, one in which she seldom raised her voice, but it was clearly understood they had not met her expectations. She was a great advocate and listener. She would help her children with their schoolwork, and it was nice having a home tutor who had been a straight-A student! She taught all her children how to sew and became very involved in Girl Scouts with her daughters.

She assisted her husband in typing and organizing papers when he needed an extra pair of hands. She did some seasonal work for the Coors Elevator, Donnell and Allred, Inc and Holly Sugar, but her favorite work was her family. Vacations would consist of cramming everyone (and their luggage) into a VW Bug and camping or hiking. If things got too "heated" in the back seat, she would go back and sit in the middle to keep peace. Occasionally, the children got to "run a mile or so" down the road to help the trip go by more peacefully.

Mary became involved with a sewing club upon their move to Worland and kept that involvement until a few years ago. She was also part of a Bridge Club and she and Gene enjoyed their date nights immensely. She loved crafting and took paint lessons, being mentored by Elva Ecton. This led to her being asked to join the Worland Artist Club. People will remember her smile when they think of Mary. It was her best attribute, even to the end as she smiled through her pain. It was nice to hear her laugh and she was so easy to love. She loved her family, her flower gardens and her beloved pets. She even bought extra cat food to feed the stray cats in the neighborhood.

Memorial service will be held 10:00 am, Saturday, July 10, 2021 at the CrossPoint Baptist Church Washakie Campus (15th Street and Washakie Avenue). Memorial donations may be made to the New Hope Humane Society and sent to PO Box 524, Worland, WY 82401. Online condolences may be made at http://www.bryantfuneralhomeonline.com.