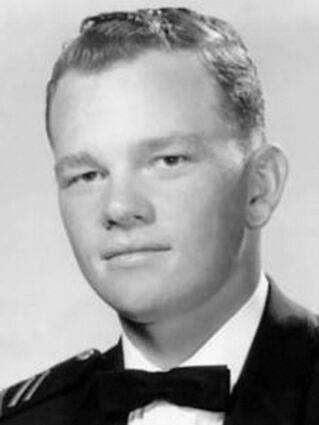 Alva Ray Krogman, 25, was the definition of a true American hero. Ray took his last breath, fighting for his country and defending the rights of each and every one of us. Ray was born April 12, 1941, in Worland, Wyoming. He was the second born to Marx and Metta Louella (Stone) Krogman. His brother Roy was 10 years older than him and joined the Navy after graduating in 1949 from Lovell High School.

Ray grew up in Worland, where as a youth he was very active in Boy Scouts. He earned as many badges as he could even attaining the rank of Eagle Scout. He graduated from Worland High School in 1959. During those years, he participated in many clubs and activities. He was a member of the Science and Math Club, Radio Club and The National Thespian Society. He lettered in football 3 years and was All-State Honorable Mention his senior year. Ray was also a member of the "W" Club. He was the president of his senior class, and he was chosen as a representative for the Wyoming Boys' State Program. His mother was quoted in an interview, "Ray was very ambitious; he wanted to make the world better. He wanted to be a leader, and he put every effort for it."

After graduating from high school, Ray accepted an appointment to the US Air Force Academy at Colorado Springs, Colorado. During his time at the academy, Ray flew the Northrop T-38 trainer.

Following his training and graduation from the Academy in 1964, Ray was assigned to a tactical fast response unit of the 12th Air Force and stationed at James Connally Air Force Base in Waco, Texas. He was assigned to various missions including the KC-133 Transport but was eventually deployed to the Forward Air Controller (FAC) wing in Vietnam.

Sometime in 1966, Ray started flying, as a Forward Air Controller, in the Cessna O-1F, a small single-engine propeller-driven plane also known as the Bird Dog. The Air Force refers to these Cessna planes as the 0-1F Bird Dog, but the same civilian model is referred to as an L-19. These planes are usually unarmed. At this time, he was stationed at Nakhon Phanom Royal Thai Air Force Base in Thailand. Their main mission was to fly over the Ho Chi Minh Trail in Laos west of the De-militarized Zone, as well as into North Vietnam. They would look for trucks, anti-aircraft gun placements, and other enemy activity. Once found, they would mark them and direct other Navy and Air Force jets and bombers to these enemy targets.

1st Lieutenant Krogman was assigned to the 504th Tactical Air Support Squadron, flying as a Forward Air Controller over Laos. On January 17, 1967, while on temporary duty with the 23rd Tactical Air Support Squadron, he took off from Nakhon Phanom Royal Thai Air Force Base in Thailand in an 0-1F Bird Dog on a visual reconnaissance mission over Savannakhet Province, Laos. Krogman's aircraft was struck by 37mm anti-aircraft fire and crashed in the target area he was marking. His last transmission was "I'm hit." 1st Lieutenant Krogman was killed in the incident, and his remains could not be recovered at the time of his loss. On February 14, 2019, a Scientific Recovery Expert working at the crash site in Ban Kok Mak, Laos, reported the recovery of possible remains and material evidence. In 2019, the Defense POW/MIA Accounting Agency received these remains and subsequently conducted recovery efforts at the crash site, yielding additional remains and material. These remains were consolidated and on July 7, 2020, they were identified as those of 1st Lieutenant Alva Ray Krogman.

First Lieutenant Krogman was awarded the following medals from the Air Force for his service:

Please help us welcome First Lieutenant Alva Ray Krogman home on July 19, 2021 by lining the streets starting at DPS on 10th Street all the way to Bryant Funeral Home on Big Horn Avenue. With a flag in your hand, family by your side and a patriotic heart, join us as his family, the Patriot Riders, Wyoming Highway Patrol and Bryant Funeral Home bring him to home soil at last. Let's show First Lieutenant Alva Ray Krogman's family how this town can come together to honor one of our very own. We are hoping to reach Worland by 5:00 pm but due to the uncertainty of flights and traffic we will continue to update the town of Worland of any changes via our Facebook page.

On July 21, 2021, please join our community at the Worland Middle School Auditorium. A visitation will be held from 9:00-11:00 am where an open casket with 1st Lieutenant Krogman's dress uniform will be draped inside as we pay our last respects. A formal service will begin at 11:00 am with Reverend Linda Anderson officiating. Following services, the community will be escorted down Big Horn Ave to Riverview Memorial Gardens as we take 1st Lieutenant Alva Ray Krogman to his final resting place. Please plan accordingly as the entire length of Big Horn Ave will be closed for the funeral procession. Full military honors will be performed including an Air Force flyover just after 12:00 pm. The community is welcome and encouraged to come to the visitation, funeral and graveside. Following all services, there will be a reception luncheon at the Washakie County Fairgrounds. Online condolences may be made at http://www.bryantfuneralhomeonline.com.