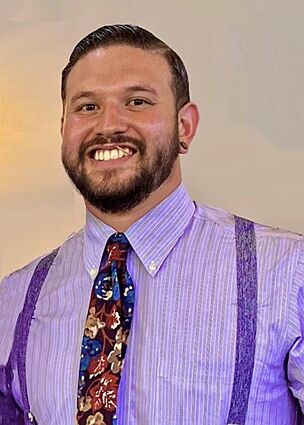 J. Connor Roussel was born in Bryan, TX to Drs. Allen Roussel and Patricia Holland. Connor attended Louisiana State University (LSU) and graduated from Texas State University with a degree in Public Relations. He proudly and honorably followed in his maternal grandfather's footsteps, serving in the United States Marine Corp from 2009 - 2014 as a CBRN (chemical, biological, radiation, and nuclear) specialist. He was employed as an Area Manager at Amazon in San Marcos. The most important event of Connor's life was the birth of his son, Gage, in 2016.

Connor grew up in College Station, TX where he participated in a variety of sports and activities. He played soccer for years, was an accomplished wrestler, and also won numerous state level awards in French language competitions. A gifted wordsmith, Connor excelled at writing and public speaking and had a knack for photography. Childhood summers were often spent at the family ranch, south of Ten Sleep, where he developed a love of the land and outdoors as well as a strong work ethic.

From his father's family, Connor gained an appreciation for travel and cuisine. An excellent cook, he successfully participated in cooking contests. He was a huge sports fan and rabid LSU football supporter known for wearing outrageous purple and gold outfits on any game day. He also enjoyed music from different genres and dressing "to the nines" for special occasions.

Connor was a loyal and dearly loved friend to many people from different walks of life. He's best described as "all his friends' and family's biggest fan". Despite the tragic and untimely loss, his family is so very proud of the lives Connor meaningfully impacted. His sharp wit and philosophical mind will be deeply missed by all who knew him.

Connor is preceded in death by grandparents Louis and Ida Holland of Worland and A. J. and Maisie Roussel of Baton Rouge. He leaves behind to honor and cherish his memory: parents Allen and Patricia; siblings Kathryn, Debra-Ann, Richard, John-Michael, Steve, and Franklyn; son Gage; and many special cousins, aunts and uncles, including Pamela and Michael Holland.

Funeral services were held in College Station. Connor's remains will be scattered at the family ranch next summer. A memorial fund was established to fund an educational trust for his son. Contributions may be made to: Joseph Connor Roussel Memorial, c/o Security State Bank, 320 N. 10th, Worland, WY 82401. Online condolences may be made at http://www.dignitymemorial.com