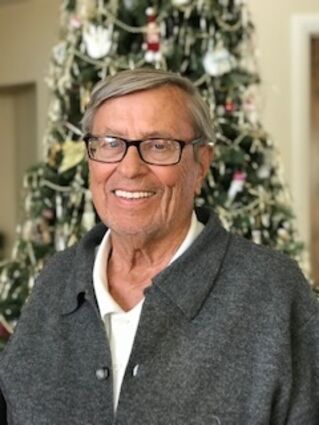 George was born July 22, 1934 in Ketchikan, Alaska; the youngest of 4 children to Charles Lester Cloudy Sr. and Doris Evelyn Wells Cloudy. Growing up in Alaska when it was a US Territory, He spent time in his Grandma Hunt's Book store, learned to play the piano from his Aunt Amy and learned to climb a tree to escape a bear. He was also an accomplished fisherman, taking second place in the Boy Scout's national fishing competition.

George's father passed away and his mother remarried Warren "Red" Wilkins who was a wonderful stepfather. He graduated from Ketchikan High School in 1952. Next, George put himself through school at Montana School of Mines in 1956 where he played on the varsity basketball team, excelled in his studies, and finally learned to drive a car. After university, George spent time in the US Army working as an engineer. George pursued a career as a Geophysicist. While working in oil exploration for Texas Instruments, he met Bobbie Jean Wiley who was teaching grade school in Shoshoni, WY; though the story he always told was that they met while she was singing at the Shoshoni prom. Bobbie was the love of his life. They married June 13, 1958 in Worland, WY. They moved frequently for his work and raised children all around the world.

Heather Lynn was born in Rawlins, WY in 1959 and Lisa Diane was born in Bakersfield, CA in 1961. Shortly after their births, the family moved to Moab, UT, Craig, CO, Canada, and then back to Texas where George Jr was born in Dallas in 1962. Next, they moved to Houston where Cheryl Lori was born in 1966. Scott Warren was the final addition in 1970.

George was often gone for long work trips due to his job. He traveled the globe, filling many passports while only missing 2 continents (Antarctica and South America, the latter because there was too little oil and too many bugs). In 1965, George co-founded Digicon INC, once the largest independent geophysical concern in the world. In the 70s, George moved his whole family to Singapore, and then later back to Texas. His work allowed him to retire at 43 and move the family to Meeteetse, WY where he enjoyed his role on the school board and watching his children's activities. George didn't stay in retirement long before returning to work where he and Bobbie spent time in England, Conroe, TX, Denver, CO and Meeteetse, WY. In the 90s, he moved to Scottsbluff, NE to help take care of his mother before her death in 1999. From there, he and Bobbie finally retired to her parent's farm in Manderson, WY where he built his own garage in his 70s. They enjoyed their view of the Big Horn Mountains and their visits with family.

Dementia is a cruel disease and took his Bride in 2014. With growing health concerns in his later years, he spent much of his time with his daughter Lisa in Denver, most recently moving to Phoenix, AZ.

George was proceeded in death by his parents, stepfather, wife, siblings and Thady Louis. He loved winters in Maui, A good sunset and his family. A memorial service will be held at a later date.