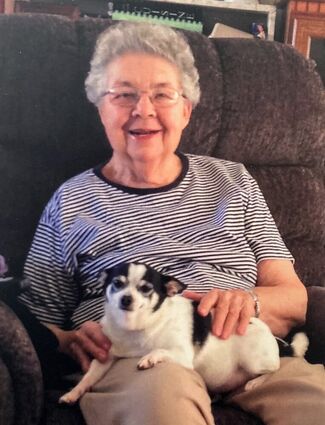 Margie was born in Baird, Texas to Preston and Beulah Moore on December 9, 1927. She was raised on a farm near Baird. She graduated from Oplin Texas High School in 1944. She married Lewis D. Fisher on September 2, 1945 in Abilene, Texas where they lived until 1950. They lived in Ballinger, Texas and various places including Lander, Wyoming and Cortez, Colorado before settling in Worland, Wyoming in 1959 as Lewis followed his Career with Stanolin Oil. Lewis passed away in 1989. Margie married Robert Cabiness on February 14, 1997 and lived in Worland during the summer and near Weatherford, Texas during the winter until Robert passed away in 2010.

Margie devoted the early part of her married life to raising children and providing for her husband. She worked at Ben Franklin Department Store and was a Teacher's Aide at West Side Elementary School for 14 yrs. She was a 4-H leader; was active in the Southern Baptist Church and the VFW auxiliary. She loved collecting, traveling, spending time with her family, laughing, reading cookbooks, and listening to Cooking Shows.

Visitation will be Wednesday, January 12 from 5 to 8 PM at Veile Mortuary Colonial Chapel, 301 South 8th Street, Worland, Wyoming. A Funeral Service will be held at 1 PM, January 15, 2022 at Crosspoint Baptist Church, Washakie Campus, 821 south 15th (corner of 15th and Washakie) Worland, Wyoming with John Burns, Lead Pastor officiating. Burial will follow at Riverview Memorial Gardens Cemetery. Memorials may be made out to Regena or Preston Fisher c/o Veile Mortuary, P.O. Box 730, Worland, Wyoming, 82401. Arrangements have been entrusted to Veile Mortuary.