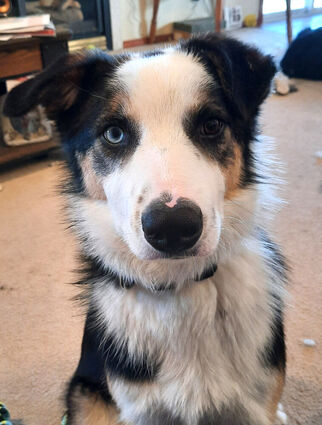 When I discussed Roscoe it was in the context of an issue of pet owners versus parents and I said then I would come back to telling you more about our youngest furchild. That time is now.

Roscoe has one brown eye and one blue eye. He usually gives me a sideway glance with his brown eye as if to say "Really." I get that look a lot, especially when telling him "no." He hears "no" a lot.

"No, don't chase the kitties."

"No, don't use your sister as a chew toy." And he does. A lot. OK he is still a puppy and does all of the above a lot.

As for chasing the kitties it is not to be mean he really only chases them when his sisters Ivy and Shadow quit playing with him outside so he tries to get the kitties to play. Kitties do not like rough-housing for fun with dogs but Roscoe has yet to learn that. They hiss, they scratch, and he backs away but then comes back for more.

When Roscoe is in a calmer mood the kitties come up and rub against him as they do the other two dogs as well.

Now remember I am writing this almost two months after adoption so this has not been an easy process. It took time. It took a lot of time for the middle child to accept him and start playing with him. She loves to chase and rough-house outside but is still territorial inside. She may have been the youngest before Roscoe but she was/is the alpha of the lot.

The oldest, Ivy, is the chew toy. Roscoe will lie down beside her and just start chewing on one of her feet. I'll holler and I'll get the look from Roscoe and a sweet wag of the tail from Ivy. She is the most patient, loving dog I have ever been blessed to know.

When we got Shadow as a pup and again with Roscoe, my husband remarked that Ivy would have been a very good mother. I think that's how she treated Shadow and that's how she looks at Roscoe, as her pups.

The struggles we had before with three dogs we still have, no one wants to eat out of his/her bowl because they are sure the others got something different. (OK, yes Roscoe as a puppy does get a little something special with his breakfast but he is a growing boy and the other two are needing to trim down a bit. I know don't we all.)

The one thing I have done with Roscoe is bring him to work more than I did with the other dogs. I am trying to keep him a social animal because he loves people. Maybe too much as he got into a friend's car the other day without hesitation. I would prefer him to be a bit more cautious.

But I want him to have a lot of opportunity to be around people, to be around different sights and sounds than he gets out in the country.

But, I also realize Roscoe being in the office can be a distraction to me and other staff members so he only gets to come on days that are not as hectic.

And, if any of you have any stuffed animals you are wanting to unburden, well Roscoe has pretty much went through our toybox. For nearly a month every day I came home it was as if a stuffed animal exploded in the living room with stuffing everywhere.

I purchased a toy that was supposed to be "tough." Not so tough. They really need to test those with 6-month-old puppies.

So that is Roscoe. Rest assured he is fitting in well with our family and we are blessed to have him in our lives.