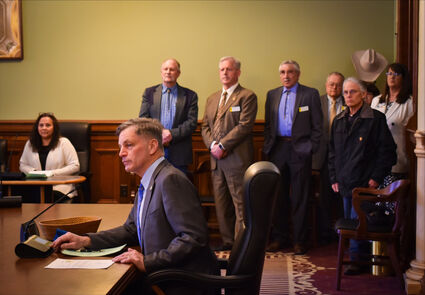 Governor Mark Gordon, joined by sponsors of the state's new Second Amendment Protection Act, listens to supporters of the bill before signing it into law Monday. Gordon was joined in the ceremony by members of law enforcement agencies who helped draft the bill.

The bill passed during the Wyoming Legislature's recently concluded 2022 budget session. It is designed to protect Second Amendment rights, as well as prevent federal regulation of firearms, accessories, magazines and ammunition. Sheriffs, officers, gun rights advocates and lawmakers said the legislation was needed as President Joe Biden's administration pushes for such control.

"This is a culmination of a lot of effort with law enforcement, gun owners in Wyoming, Shooting Sports Foundation, all those people that have a strong belief in the Second Amendment," bill sponsor Sen. Larry Hicks, R-Baggs, said at the signing. "We hope that the federal government will never do an unconstitutional act that would infringe upon people's Second Amendment right."

The bill clearly states public officers are prohibited from enforcing, administering or cooperating with an unconstitutional act of any kind, and sets one of the harshest punishments for violation in the nation. An individual who knowingly violates the law is guilty of misdemeanor punishable by imprisonment for up to one year, a fine of up to $2,000, or both.

Nothing in the act can limit or restrict an officer from providing assistance to federal authorities or accepting federal funds for law enforcement purposes.

"We stand strong together to hold ourselves and our officers accountable to not enforce, administer or cooperate with any unconstitutional acts," said Wyoming Association of Sheriffs and Chiefs of Police Executive Board President and Rock Springs Police Chief Dwane Pacheco. "This is one of the most important legislative actions on a personal and professional level that I have seen in my career."

Pacheco testified throughout the session in support of the bill, which moved forward in the process instead of the Second Amendment Preservation Act filed on both the House and Senate sides. The legislation was similar to the bill signed into law, but would have set harsher punishments for violators and put members of law enforcement at risk of civil action by citizens. In the end, this alternative plan failed introduction because legislators in opposition said they were concerned about possible repercussions for public officers.

The Second Amendment Protection Act instead passed with a large majority. The House passed Senate File 102 on third reading 43-15, and the Senate concurred 22-7.

"This is an honor to be able to sign this bill," Gordon said. "I thank everyone who worked on this bill to get it to my desk.

"It joins the Firearms Freedom Act. It's a very strong statement of Wyoming appreciation for Second Amendment rights and the constitutional opportunities to use firearms."

This story was originally published on March 22.