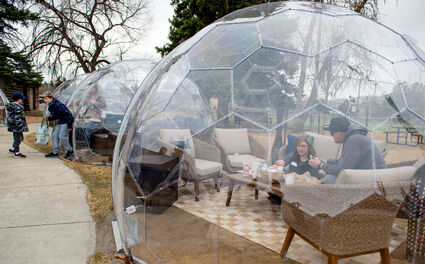 Chrystal and Calvin Alpers share lunch in Cody as a cold wind blows and flakes of snow fall at the new domes built with funds from the federal government's Coronavirus Aid, Relief and Economic Security (CARES) Act. The Park County Travel Council purchased the domes, which can withstand winds of up to 115 mph.

POWELL - Snowflakes caught in a chilly wind whizzed by as Chrystal and Calvin Alpers ate lunch in Cody. They could have seen birds flitting between branches in nearby pines and squirrels scampering from tree to tree, but they were too busy catching up on the morning news while enjoying some fast food together.

Nearby picnic tables were understandably vacant on the wintry spring day, but the couple was comfortable inside one of the new geodesic domes installed next to the Cody Country Chamber of Commerce office.

"They're kind of convenient," Calvin admitted. "It's nice during the winter, because they stay naturally warm from the sun's radiation."

They visit the translucent domes "several times a week," Chrystal said, often bringing their children or meeting them there after school at nearby Cody High School. They cited comfortable furniture and appointments including an attractive animal hide area rug. But the real reason they enjoy visiting is the ability to enjoy time in the park without being blown away by the area's notorious winds.

They first discovered the domes while on a date night after seeing friends' posts on social media. Purchased by the Park County Travel Council with funding from the federal government's Coronavirus Aid, Relief and Economic Security (CARES) Act, they are the newest "Instagrammable" destinations, according to Ryan Hauck, the council's executive director.

"The demand has been more than what we're expecting," Hauck said.

Besides the daily visits by folks looking to share a meal or some time together, Hauck said he's seen out-of-state school buses full of children come and eat lunch and has had requests from businesses seeking to use the domes for a day and organizations seeking to run events among the six domes.

The domes, which cost about $4,000 apiece from maker Hypedome, meet city codes for wind ratings, built to withstand 85- mile per hour winds and gusts up to 115 mph.

"They can handle that easily," Hauck said.

Hypedome suggests their structures are perfect as a garden lounge for home or business, a meeting room, or a comfortable glamping pod. They are available in several sizes, including for up to 14 guests.

First designed by Buckminster Fuller prior to WWII, the spherical structure of a dome - using the strength of triangles rather than typical rectangle construction techniques - are able to withstand extreme weather.

"The geometric principles used in construction of eco living domes guarantees an inherent ability to withstand the extreme forces of nature, such as hurricanes, tornadoes and earthquakes, and any climate condition," according to Pacific Domes, one of the country's first and largest producers.

The company produces domes for temporary and permanent living options, including models used by researchers in some of the most inclement ecosystems in the world. Yet, despite the ease of building, cost savings and safety, some in Cody feel the construction style sticks out; they rest alongside the chamber building, which features the log construction typical of the Western flair found along the city's main street.

Several people have gone public with their disapproval.

Diana Nagy gave the project "two thumbs down" in a recent letter to the editor of the Cody Enterprise.

"I feel compelled to chime in on the very unWestern domes located near the Chamber of Commerce building and the Travel Council's role in placing them there," she wrote, adding "When in Rome, do as the Romans do."

Scott Weber was even more vocal about his dislike for the project, writing in a letter to the Enterprise that all of the CARES Act money awarded to the Park County Travel Council was "wasted." He called the domes a reaction to COVID-19 social distancing recommendations.

"They are a reminder that another scare could come upon us and they are just the ticket to isolate," Weber wrote.

Hauck, however, said the domes are not intended to isolate visitors or encourage distancing protocols.

"Does it work for COVID 100%? It does. But is it meant for COVID to segregate people? Not at all," he said. "It's a great outdoor option to enjoy what we have [in downtown Cody] and get people out of the wind and to create more overnights [by visitors]. It's a cheap way to gain another attraction in our area."

Although it didn't draw much attention at the time, the domes were first discussed at a November meeting of the Cody City Council. Filling in for Hauck, Cody Country Chamber of Commerce Executive Director Tina Hoebelheinrich noted their growing popularity across the globe.

"It really [has] become a standard part of how people have adapted to a pandemic, by moving those intimate dining situations or even just meeting situations out to the outdoors where there's ventilation and smaller spaces with less public access," she told the council.

Hoebelheinrich noted that the domes would supplant "old dilapidated picnic tables," giving both local residents and tourists another outdoor dining option in the winter months.

"Ryan [Hauck] has done such a brilliant job spending that money for projects that make a lot of sense and really would improve our community greatly," she said. "And I feel like this is one of those projects."

After asking a couple questions about whether there would be adequate bathroom access in the winter and whether the domes could withstand the wind, councilors unanimously agreed to allow the installation of the structures on city property.

Cody Mayor Matt Hall called the domes a "pretty novel idea" that could enhance the experience for both tourists and locals. But some locals have since complained.

Park County Commission Chairman Dossie Overfield raised the issue during a March 1 meeting, telling Travel Council member Ruffin Prevost that she had received "a lot" of calls about the "plastic bubbles."

"Most of the phone calls that I've received have been negative," Overfield said, "that they might be OK in the cities but not OK in Cody, Wyoming."

Prevost said he had also expressed misgivings about the domes.

"I support his [Hauck's] decision after the fact, but I was not entirely in favor of it," Prevost told commissioners. "Because I said, 'I don't know that this is necessary. And I don't know how well received it would be.'"

However, other board members felt differently and the plan was approved. Prevost added that he's seen similar domes prove "very popular" in bigger cities - and he noted they were purchased only after more pressing items were acquired with the CARES Act funding.

For instance, the travel council purchased "every piece of camera gear, every piece of recording equipment or new laptops, everything we could get equipped to do in-house marketing," Prevost said - something that will "save substantial money over the long haul."

Hauck has heard the negative feedback about the domes and has no problem with the critiques.

"I think one of the reasons this place is so special is because we have such passionate locals that love where they live," he said.

Hauck also said those with positive feedback often don't speak up. Proof of their popularity, he said, is that the domes are drawing interest from other communities and private citizens who love the idea.

"I've gotten calls from all over the state asking where I got them, how much cost and how could they get them?" he said. "It's not just over the state, but locally as well. I've had a lot of ranchers call me. They didn't say this out loud, but I think they're interested as using these as like a glamping option."

The Park County Travel Council has tentative plans to hold a grand opening and ribbon cutting ceremony for the domes during the city's Parks and Pancakes Day, which is scheduled for May 6. The domes are open daily, closing at 10 p.m., and will feature festive lighting as soon as power supplies are secured.

This story was published on April 14.