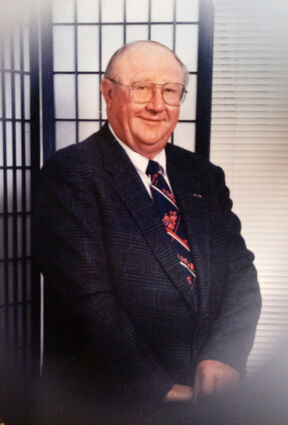 James Allen Michel, a lifelong resident of Worland, Wyoming passed away on April 13, 2022. He was born to Henry and Eva (Jung) Michel on November 7, 1935, in Worland. He grew up on the family farm, the youngest of six siblings and attended school in Worland, graduating in 1954. He attended the University of Wyoming for one semester but came then came home to work with his father on the family farm.

James Allen Michel married Clarice Mae Hefenieder at Zion Lutheran Evangelical Church in Worland on March 10, 1957, and they spent the next 64+ years together taking care of each other and their three children. Jim and Clarice farmed along Washakie Ten for their entire life together.

James was a lifelong member of Zion Evangelical Lutheran Church and served with the Church's governing body over the years. He also served on the Board and held offices with the Washakie County Beet Growers Association. He was a student State President of the FFA and very much enjoyed the train trip to Kansas City to attend the convention during his tenure. Both he and Clarice were active in leadership and enthusiastically supported 4H and FFA, while devoting countless hours to the youth organizations.

He loved to farm and take care of all kinds of livestock and he used these passions to take care of his family. Jim and Clarice endured many hardships in farming, but never lost their love of farming life nor their faith in God. In recent years, Jim and Clarice enjoyed traveling with their family and seeing new places.

Despite losing a leg to diabetes and the neuropathy pain associated with the disease, he seldom complained. A further complication of the diabetes would require him to receive dialysis in the final months of his life. Despite declining health, he maintained his sense of humor and enjoyed talking to everyone.

He was preceded in death by his wife Clarice on July 16, 2021, his parents, Henry and Eva Michel; his brothers, Edward Michel and Henry Jacob Michel; and his sisters Rachel Klemm, Leah Johnson and Frieda Reiber.

He is survived by his sons James Allen Jr. and Thomas Grant; daughter Jacqueline Marie; and many cousins, nieces and nephews.